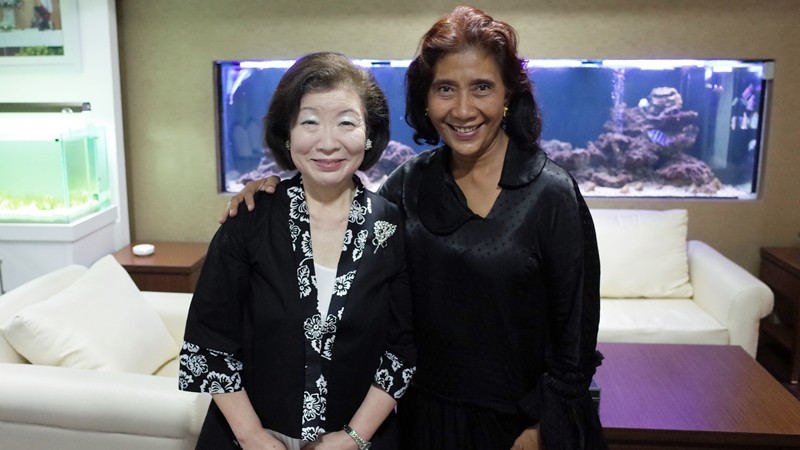 Jakarta, 24 May 2018: Prof Akiko Yamanaka, Special Advisor to the President of ERIA, visited Jakarta from 23 to 25 May 2018 to attend the 11th ERIA Governing Board meeting and hold several meetings with Indonesian dignitaries.

On 24 May, Prof Yamanaka had a meeting with HE Susi Pudjiastuti, Minister for Maritime Affairs and Fisheries of Indonesia. During the meeting, the Minister pointed out the importance of navigational freedom in the South China Sea. Both exchanged views on several issues such as security, natural disaster and Tsunami to promote peace in the region.

On 23 May, Prof Yamanaka visited the KOWANI (National Council of Women of Indonesia) office and met with Dr Ir Giwo Rubianto Wiyogo, the President of KOWANI. It is the largest women’s organization in Indonesia and has had deep ties to Indonesian politics since its inception. Dr Rubianto welcomed Prof Yamanaka and introduced  KOWANI and gave a brief explanation on its activities. She expressed her great interest in ERIA’s works since women's economic activity is a major part of Indonesia's economy. They discussed activities that promote recognition of the important role of women in the community and global society.

HE Purnomo is the founder of Purnomo Yusgiantoro Center (PYC) which is involved in several social initiatives. Led by Mrs Lis Purnomo Yusgiantoro, Prof Yamanaka watched the Indonesia-Japan music cultural collaboration project which is one of PYC’s activities. The project combines the Japanese traditional musical instrument ‘Koto’ with the Indonesian traditional instrument ‘Kolintang’.  The resulting music will be highlighted at an event celebrating the Japan-Indonesia 60th Anniversary to be held in Tokyo on 24 August 2018.