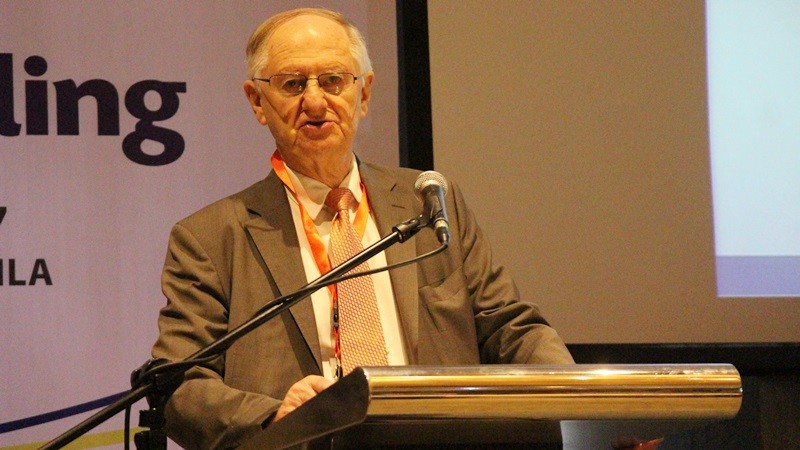 Amidst the growing trend of protectionism in the industrial world, ASEAN must offer an alternative course towards regional reform and liberalisation through the Regional Comprehensive Economic Partnership (RCEP) agreement, said Prof Dr Peter Drysdale, Emeritus Professor of Economics at the Crawford School of Economics and Government, the Australian National University, in Manila.

'We need to avoid the inclination towards protectionism in Northeast Asia, stand up and offer an alternative course, and that is what ASEAN can do through RCEP today. So RCEP is formed as the next step in regional reform and liberalisation in our region. It is now of course still important in that respect, but it is even more important as a statement and a strategy against protectionism in the industrial world. ASEAN at the centre of RCEP, which include China, India, Japan, Korea, Australia, and New Zealand, can take that forward as a brake on the train of protectionism elsewhere,' said Prof Drysdale, who is also the Head of the East Asian Bureau of Economic Research and East Asia Forum at the Crawford School.

Prof Drysdale's essay entitled ASEAN: The Experiment in Open Regionalism that Succeeded was published by ERIA in Volume 5 of the five-volume commemorative publication in the [email protected] project.

'Today, ASEAN's importance is of global stature. It sits at a fulcrum of a choice point in international economic policy, and going forward, completing the RCEP process will be an important contribution in managing the problems and the challenges that ASEAN and we all face in the global economy today,' said Prof Drysdale in closing.

Executive Director Zaldy Patron from the DFA's Office of ASEAN Affairs stated that the RCEP negotiations is expected to move closer towards completion.

'Under the Philippines ASEAN Chairmanship, the 16 RCEP participating countries are aiming to achieve significant outcomes by the end of this year to bring the negotiations closer to a successful conclusion,' said Director Patron. 'The Philippines is confident that the implementation of the economic initiatives ASEAN has lined up this year will deepen our regional economic integration, and in the process, contribute to the nation-building of each ASEAN member state.'

This public symposium was part of the commemorative events for the 50th Anniversary of ASEAN and it was the third of four public symposia that ERIA is hosting to commemorate the 50th anniversary of ASEAN. The first symposium on the ASEAN Political-Security Community was held in Iloilo with the ASEAN Research Institute for Strategic Studies and Enterprise (ARISE) and the University of the Philippines (UP).

The second symposium on ASEAN Socio-Cultural Community was held in Davao, in collaboration with PIDS, Mindanao Development Authority (MinDA), and ASEAN Society Philippines, with the support from the DFA - Philippine Mission to ASEAN. Former President of the Philippines, H.E. Gloria Macapagal-Arroyo, delivered the keynote speech of the ASCC Symposium, in which she recounted her experience as the Chair of ASEAN and highlighted the importance of ASCC for the Philippines.

The High Level Forum on [email protected], which is planned to be held in October in Manila, will conclude the series of commemorative events.