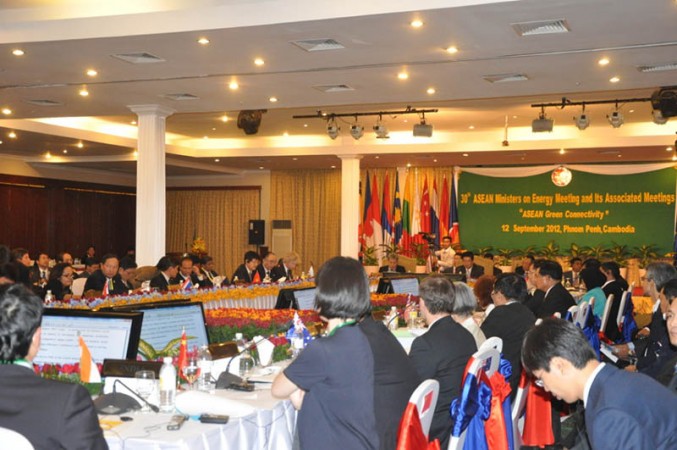 The 30th ASEAN Ministers on Energy Meeting (AMEM) and its Associated Meetings under the theme of "ASEAN GREEN CONECTIVITY" was held in Phnom Penh, Cambodia on September 12, 2012.

These series of high-level energy meeting were organized by the Ministry of Industry, Mines and Energy (MIME) of the Kingdom of Cambodia as the host country in collaboration with the ASEAN Secretariat and ASEAN Centre for Energy.

H.E. SUY Sem, Minister of the Industry, Mines and Energy lead the Meetings which was participated by the ASEAN Ministers on Energy, the Plus +3 Energy Ministers of the People's Republic of China, Japan, Republic of Korea, the EAS Energy Ministers of Australia, India, New Zealand, Russia and the United States, the International Energy Agency (IEA) and Economic Research Institute for ASEAN and East Asia (ERIA) as well as Private Sectors.

During the meeting, Prof. Nishimura briefed the Ministers on the outcomes of the 2nd EAS Energy Efficiency Conference, held on 31 July-1 August 2012, in Phnom Penh, which is co-organised by ERIA and the ASEAN Centre for Energy. The need for increasing the business sector participation in this forum was emphasized, and Ministers requested that ERIA continue this annual forum.

Prof. Nishimura also reported on the progress of the five additional research areas tasked out to ERIA by Energy Ministers at the 5th EAS Energy Ministers Meeting. ERIA looks forward to working closely with other policy and research institutions on these new projects.

Ministers spoke of the continuing global uncertainty and the enduring requirement for energy. Ministers were very interested to see the EAS/ERIA research translate into good energy policy and pragmatic implementable actions. Ministers also promoted the co-operative nature of ERIA's research activities.In recognition of the research being undertaken by ERIA, ERIA was invited by the ASEAN Secretary General, Dr Surin Pitsuwan, to participate in the 30th ASEAN Energy Ministers Meeting.

In the Joint Ministerial Statement of the 30th ASEAN Ministers of Energy Meeting, Ministers expressed their appreciation to ERIA for its support in paragraph 16.

16. The Ministers welcomed the continued sharing of best practices and capacity building activities through the ASEAN-US Energy Efficiency Education Workshop on 4-5 July 2012 and the ASEAN-EU Seminar on Energy Security and Investment Regulation Framework on Interconnections on 10-11 September 2012 in Phnom Penh, Cambodia. In this connection, the Ministers expressed their appreciation to the Economic Research Institute for ASEAN and East Asia (ERIA) for its support in research and valuable recommendations for energy cooperation in ASEAN and EAS member countries.

In the Joint Ministerial Statement of the 6th East Asia Summit Energy Ministers Meeting, there were five paragraphs relating to ERIA as below.

3. The Ministers welcomed the steady progress made by EAS countries in the Energy Efficiency and Conservation Work Stream. This includes the adoption, on a voluntary basis, of energy efficiency goals and national plans on energy efficiency, which resulted in a reduction in energy intensity in most EAS countries in the period 2005-2009. The Ministers noted that Total Primary Energy Supply (TPES) of the EAS region is projected under the IEEJ Asia/World Energy Outlook to account for 62% of the World TPES in 2035, demonstrating that actions to be undertaken to improve energy efficiency in the region will play a very important role in the future global energy landscape. The Ministers appreciated the contribution of relevant institutions of member countries by organising activities for the development of human resources and information sharing on energy efficiency. The Ministers also welcomed the studies on energy saving potentials that reflect the progress of action plans of the ASEAN member countries to improve energy efficiency. The Ministers expressed appreciation to Cambodia for hosting the Second Energy Efficiency Conference on 31 July - 1 August 2012 including the report on Lao PDR and noted the Conference's policy recommendations.

4. The Ministers commended the energy officials for the further progress made in the Biofuels for Transport and other Purposes Work Stream, particularly the further development of the Biofuels Database in East Asia Countries to include good practice of biofuel utilisation in respective countries, the research activities undertaken under the Asia Biomass Energy Researchers Invitation Programme, and the joint studies on Biodiesel Fuel Standardisation and Sustainability Assessment of Biomass Utilisation in East Asia conducted by ERIA. The Ministers encouraged the energy officials to further advance the implementation of these programmes, building on the good achievements made in the past years.

5.The Ministers expressed appreciation to ERIA for its contribution to the work of the Energy Market Integration Work Stream by conducting the Study on "Energy Market Integration (EMI) in East Asia: Theories, Electricity Sector and Subsidies". The Ministers tasked the Senior Officials to consider the recommendations of the Study for possible practical adoption. The Ministers also expressed appreciation to Singapore and New Zealand for the organisation of the inaugural EAS Energy Market Deregulation Forum on 23 October 2012 in Singapore, to be held in conjunction with the Singapore International Energy Week 2012. The Ministers encouraged the EAS Countries to send representatives from relevant Ministries/Departments/Organisations in-charge of trade, investment and energy and energy regulatory authorities to participate in the Forum.

6.In order to enhance EAS energy cooperation and energy security, the Ministers acknowledged the importance of sharing medium-to-long term outlooks for energy supply and demand, given the growing energy demand in the region and taking into account the possible implications of natural disasters on existing energy infrastructure. In this regard, the Ministers acknowledged that ERIA, in coordination with ACE, will collaborate with the International Energy Agency (IEA) in conducting studies on energy outlooks.

7. With respect to further enhancement of EAS energy cooperation, the Ministers noted the commencement of the following research studies by ERIA with support from Japan: (i) Energy outlooks for medium-to-long term; (ii) Strategic usage of coal through Clean Coal Technologies; (iii) Optimum electric power infrastructure; (iv) Nuclear power safety management; and (v) Smart urban traffic promoting energy efficiency of transport sector. The Ministers welcomed the establishment of a new energy unit at ERIA and requested ERIA to report on the progress of the new research studies and cooperation initiatives at future ministerial meetings.