Finance and Macroeconomy , Industry and Manufacturing , Regulation and Governance 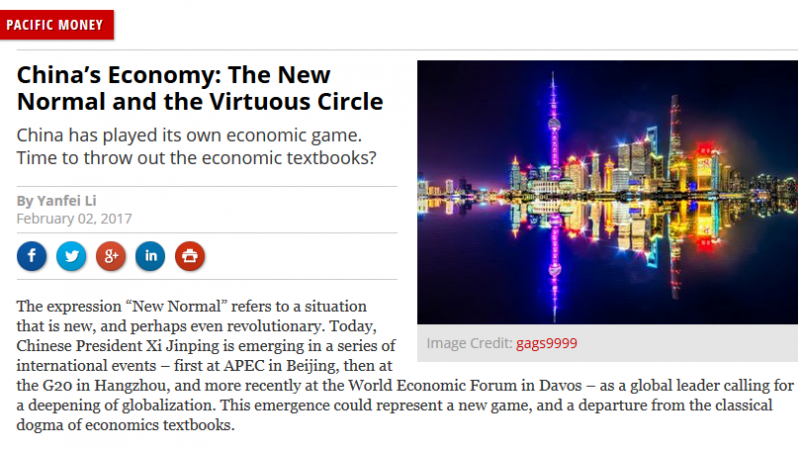 The expression “New Normal” refers to a situation that is new, and perhaps even revolutionary. Today, Chinese President Xi Jinping is emerging in a series of international events – first at APEC in Beijing, then at the G20 in Hangzhou, and more recently at the World Economic Forum in Davos – as a global leader calling for a deepening of globalization. This emergence could represent a new game, and a departure from the classical dogma of economics textbooks.

In this game, at least within the Chinese economy, reform is about enhancing the monopoly power of state-owned corporations, so as to strengthen their competitive strength; stimulating domestic consumption is about tolerating bubbles in property prices and enlarging income inequality; pushing for internationalization of the currency is not mutually exclusive to keeping the capital account and foreign exchange under strict control; promoting exports, especially high value-added exports, is actually facilitated by an appreciating currency. Indeed, through these very efforts, the Chinese economy has managed to make a leap along the global value chain and revolutionize its industrial technologies, in almost every major sector of its economy, since 2008. Behind them all, of course, is the seemingly simple expedient of “printing money,” in principle. How could this be possible?

To answer that question, let’s look first at the so-called virtuous circle built into the Chinese economy in the post-2008 era, a period of accelerated growth in M2 decoupled from real GDP growth (as shown in the accompanying figure):

This story about the rise of China is also a clear departure from the classical models under which other Asian industrialized economies, such as Japan, South Korea, Singapore and Hong Kong, had arisen. The classical models used to rely on import substitution, export-led, the flying geese paradigm, and the move from OEM to ODM (short for, respectively, “Original Equipment Manufacturer” and “Original Design Manufacturer”). Should we rewrite our economics textbooks to show other lesser developed countries how to follow a successful path? At the very least we should recognize that China has pursued the above strategies to create its own force of internal demand, at a time when struggling U.S. and European economies were unable to act as world economic engines. Of course, Western economies still hold out hope that the world will want their T-bills, bonds, and CDS. But will it?

In the coming decade or two, two outcomes of this virtuous circle of the “New Normal” need to be watched closely. The first is rising property prices. The second is the technological leapfrogging, or industrial upgrading, that China has achieved to date. The former represents the threat of a bursting of the economic bubble. The latter represents surging economic productivity and a long-term foundation for further prosperity. However, the property bubble has hijacked monetary supply and is not easy to tame. We have yet to see what extraordinary policies and leadership the elites of the Chinese economy will come up with to resolve the situation. Should we expect to see a Chinese economy that continues to boom on the strength of a property bubble for another decade? That seems unlikely. Someone must find an exit strategy in the form of a “soft landing” now. Otherwise, scrapping our economics textbooks might be premature.