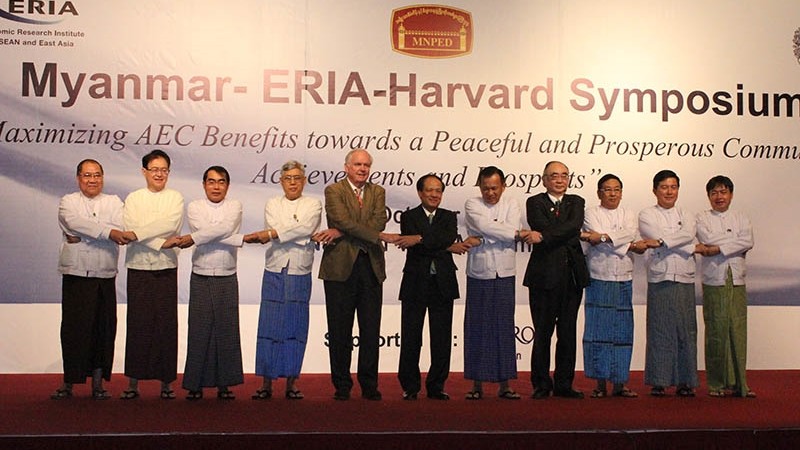 Nay Pyi Taw--The Economic Research Institute for ASEAN and East Asia (ERIA), together with the Ministry of National Planning and Economic Development (MNPED) of The Republic of The Union of Myanmar and Harvard University, co-organized the Myanmar-ERIA-Harvard Symposium on 29 October 2014 in Nay Pyi Taw, Myanmar.

"ERIA has also been supporting the AEC process through its numerous studies and research tasked out by leaders of ASEAN member states. ERIA's AEC Scorecard phase IV study, ASEAN SME Policy Index, and ASEAN Rising: ASEAN Beyond 2015, would be the key elements in each of today's sessions" Prof. Hidetoshi Nishimura, ERIA Executive Director, said in his opening remarks.

H.E. Dr. Kan Zaw, Union Minister for National Planning and Economic Development, stressed in his welcoming remarks the importance of the development of SMEs as a driver of economic growth in Myanmar as well as in ASEAN. "The dynamism and competitiveness of the region's economies depend, to a large extent, on the growth and development of SMEs."

Through the symposium, it was recognized that ASEAN has achived significant progress in its goals towards 2015. However, 2015 should be taken more as a milestone in achieving the AEC measures, as the AEC will remain a work in progress.

Professor Thomas Vallely of Harvard University, meanwhile, said that "this collaboration among the Myanmar government, ERIA and Harvard has made it possible to identify ASEAN countries, including Myanmar, in terms of where they are positioned now and what needs to be done for further development of ASEAN. More especiallly, Myanmar with its reform mindset, has the potential to become a large and influential country such as Indonesia in the future."

In her statement, H.E. Lei Lei Thein, Deputy Minsiter of National Planning and Economic Development, indicated that Myanmar "recognizes that the realization of AEC is important ... but what is more important is to take full advantage of the priviledges offered under the implementing measures of the AEC blueprint through active participation and contributions in the building of the AEC."

Finally, Professor Nishimura mentioned in his closing remarks that the outcomes and recommendations of this symposium, Nay Pyi Taw Policy Imperatives, will be submitted to H.E. U Nyan Tun, Vice President of The Republic of The Union of Myanmar, on 30 October 2014 and shared with the leaders of the ASEAN Summit.