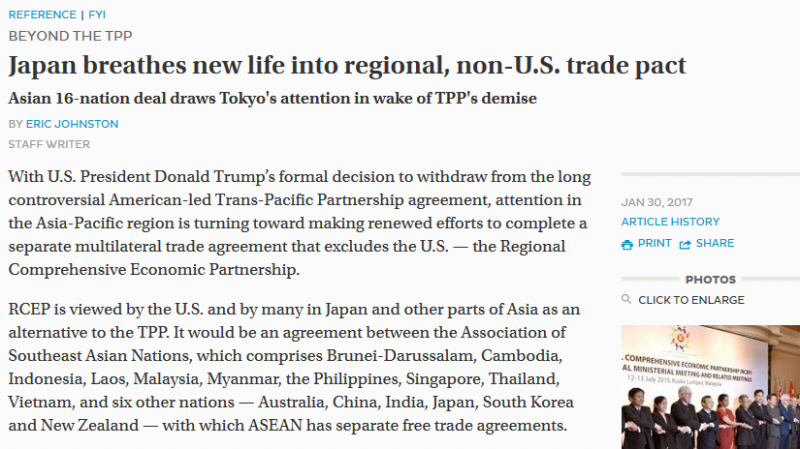 Editor's note: This article was originally published in The Japan Times on 30 January 2017. ERIA's Economist Lurong Chen was quoted.

RCEP is viewed by the U.S. and by many in Japan and other parts of Asia as an alternative to the TPP. It would be an agreement between the Association of Southeast Asian Nations, which comprises Brunei-Darussalam, Cambodia, Indonesia, Laos, Malaysia, Myanmar, the Philippines, Singapore, Thailand, Vietnam, and six other nations — Australia, China, India, Japan, South Korea and New Zealand — with which ASEAN has separate free trade agreements.

Together, RCEP members account for about half the world’s population and around 30 percent of the world’s gross domestic product. Let’s take a closer look at the giant trade project.

What is the purpose and status of the RCEP negotiations?

RCEP aims to progressively eliminate tariff and nontariff barriers on substantially all trade in goods among the 16 members. The first negotiations were launched in November 2012, at a time when the TPP negotiations appeared to many in Asia to be moving forward despite signs of growing opposition in the U.S. Congress, and American media polls that showed the public knew little about TPP and disliked what they did know.

Since then, there have been 16 rounds of negotiations as of the end of last year. Despite early optimism that a deal could be concluded quickly, however, negotiations continue because a host of issues related to tariff and nontariff barriers remain contentious.

However, there is still hope among the member nations that a deal can be concluded by the end of the year. The 17th round is scheduled to take place in Kobe in late February and early March.

What are the main areas of negotiation?

There are about a dozen, starting with ways to increase market access for a variety of goods, services and financial investments.

Fair competition, protecting intellectual property rights, telecommunications and customs rules are also on the agenda, as are various forms of economic and technical cooperation aimed at narrowing development gaps — especially between some Southeast Asian nations and their East Asian partners.

Negotiations are also taking place over a dispute-settlement mechanism similar to the contentious Investor-State Dispute Settlement mechanism that caused so much controversy, and opposition, in the TPP negotiations. Opponents of ISDS in the U.S., Australia, Malaysia and other countries had warned it could lead to domestic laws being ignored or overturned in practice.

How an RCEP ISDS would work is still being worked out.

How is RCEP fundamentally different from the TPP?

First, the United States is not a member, leading to concerns RCEP could hurt Southeast and East Asia’s relationship with the U.S., not only on trade issues but also defense and diplomacy.

On the other hand, the TPP did not include China or India, which created concern among nations that wanted an Asian multilateral agreement that did not force them to choose between the U.S. and China. RCEP has been called a China-led initiative, a claim that many in ASEAN deny.

One of the guiding principles agreed to in 2012 was that an agreement would take into account the differences in economic development among members. Those ASEAN members who have free trade agreements with China, Japan, India or South Korea but are not currently involved in the negotiations would also be able to join once they are completed.

Then there is the principle that says “RCEP will include appropriate forms of flexibility including provision for special and differential treatment, plus additional flexibility to the least-developed ASEAN Member States.” This has been criticized by some RCEP participants as offering lesser-developed countries a way out of whatever tariff reductions end up in the agreement. But it’s seen by others as a necessary incentive to ensure that as much of the region as possible is represented.

How has the TPP’s demiseaffected RCEP?

It has increased the debate about whether to keep the negotiations going as before and conclude an agreement that might be less ambitious, or to aim higher by setting high tariff-reduction targets and increasing commitments to regional cooperation, especially in areas like transportation infrastructure.

Lurong Chen, an economist with the Jakarta-based Economic Research Institute for ASEAN and East Asia, suggested in a Dec. 3 op-ed in The Diplomat that rather than conclude a more ambitious agreement, which would be very time-consuming to complete, a basic version should be finished now with the idea of upgrading it later.

“Setting a high target for tariff removal and giving a longer transition period to those who find it challenging is a much more proactive way (compared to the World Trade Organization) to move developing countries forward,” Chen said in an email interview with The Japan Times, while adding that commitments must be binding and have a timeline.

The TPP’s demise has also created speculation as to whether China will now play a more prominent role in the negotiations, especially after Chinese President Xi Jinping’s address to the World Economic Forum earlier this month in which he said China would “advance the building of the Free Trade Area of the Asia-Pacific and negotiations of the Regional Comprehensive Economic Partnership to form a global network of free trade arrangements.” Such a statement may form the basis of increased Chinese attempts to influence the contents of the RCEP agreement.

Deborah Elms, executive director at the Singapore-based Asian Trade Center, says that now that the RCEP negotiations are in the final stages, it would make sense for the talks to be restructured to provide the best agreement for everyone.

“At the beginning it was a good idea for ASEAN to take leadership and shape the agreement. As we get closer to the end (of the negotiations), RCEP should be about (all) 16 parties,” she told The Japan Times.

How does Japan view RCEP?

Compared with the TPP, Japan’s political leadership has downplayed RCEP to date, betting, wrongly as it turned out, that the American-led TPP would become reality.

Prime Minister Shinzo Abe pushed hard for the Diet to approve TPP in the apparent belief that the U.S. would also ratify it despite broad congressional opposition and clear statements by Trump prior to the November election that he was against it. The TPP was often referred to by Japanese politicians and corporate leaders as critical for not only trade, but also for Japan’s, and America’s, strategic presence in Asia.

RCEP, by contrast, received much less attention, as there was a sense that once the TPP was concluded, perhaps RCEP would follow.

That assumption has been upended, leaving Japan unsure about how much to politically prioritize RCEP.

Last week, in Diet questioning, Abe said he wanted to continue the RCEP negotiations but would push for a “high quality” agreement, one with stricter rules than some RCEP members might agree with.

The Kobe negotiations in late February will, therefore, offer Japan a chance to clarify what it wants from RCEP now that the TPP is dead.