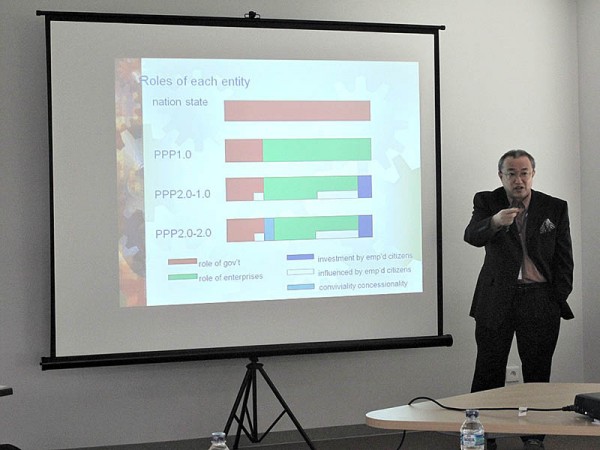 ERIA Chief Economist, Dr. Fukunari Kimura acted as a moderator. The theme of the meeting was "The Post-ODA Developmental Finance-the Empowered Citizen's Initiative and a New Type of Public-Private Partnership. The World Bank estimates the annual demand for infrastructure construction (including maintenance and operation) in East Asia from 2005 to 2010 at more than $200 billion. But the total volume of ODA is far below to meet the demand. DAC countries (22 countries) total ODA (2008) was $119.6 billion. Japan is constantly and significantly decreasing ODA budget year by year in 21st Century. What will be an adequate Japan's developmental finance scheme to meet huge demand of developing countries infrastructure building? Mr. Maeda emphasized the importance of PPP (Public-Private Partnership). He explained the two kinds of PPP. One is PPP1.0. It is defined as the collaboration between nation state governments and industrial enterprises.

Furthermore, Empowered citizens would make various types of campaign on bond investments and equity investments through information networks=playing an active role. He divided PPP2.0 into two types, PPP2.0-1.0 and PPP2.0-2.0. PPP2.0-1.0 is simple type of revenue bonds. (Investors request only economic returns). PPP2.0-2.0 is revenue bonds (Investors request economic returns and 'conviviality'). In case 'conviviality' is high, economic returns could be concessional to some extent. He said "PPP2.0-2.0 is a supreme idea." ERIA Executive Director, Mr. Hidetoshi Nishimura said "PPP will become bigger concept in the near future. In that sense, his methodology is very challenging."