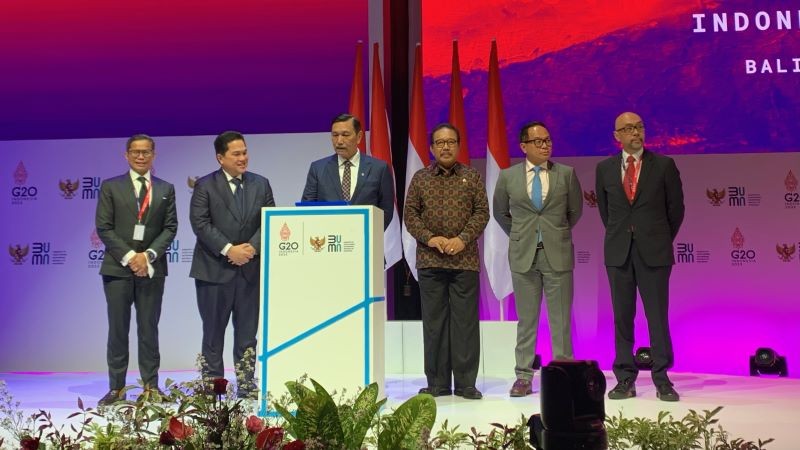 Bali, 17 October 2022: Despite the COVID-19 pandemic and the current perfect storm whipping up economies globally, Indonesia can still achieve its target of having a per capita income of more than US$9,000 by 2030 and becoming a developed country by 2045.

That optimistic economic scenario was shared by H.E. Luhut Binsar Pandjaitan, Indonesia’s Coordinating Minister for Investment and Maritime Affairs, as he opened the Road to G20: SOE (State-Owned Enterprises) International Conference held on 17–18 October in Bali, Indonesia. ‘Driving Sustainable and Inclusive Growth’ was the theme of the Conference which discussing three main issues: clean energy, health quality, and digitalization. Despite facing several global economic challenges, Indonesia has scored a remarkable growth and he added that Indonesia aims to achieve economic growth of 5.1%–5.3% in 2023.

H.E. Eric Tohir, Minister of State-Owned Enterprises, explained the reforms being conducted by the ministry, including grouping 135 SOEs into 12 portfolio clusters, having professionals run SOEs, and emphasising the role of SOEs as value-added creators and development agents. SOEs, he said, recorded US$160 billion revenues with US$9 billion net profit in 2021. He  explained the Indonesian Water Fund (IWF), which aims to raise US$300 million to provide clean water for Indonesians. Indonesia’s Vice President Maruf Amin launched IWF during the conference.

Dr Lili Yan Ing, Lead Advisor for Southeast Asia, Economic Research Institute for ASEAN and East Asia, represented an international organisation supporting the G20 Trade, Investment, and Industry Working Group. She was interviewed on the plausibility of  Indonesia’s target for economic growth and on the budget plan, and how current geopolitical tensions might be resolved.  She said that Indonesia should consider the worst scenario: recession in the first semester of 2023. She estimated Indonesia’s economic growth at 4.3%, assuming US$1=IDR16.000 and oil prices remaining at US$100 per barrel. She said that Indonesia does not have a high ratio of tax revenue to GDP, unlike developed countries. She warned the government should be extremely cautious as the last 2 years of trade surpluses were due to increases in commodity prices, particularly of palm oil and coal, two of Indonesia’s main exports. Indonesia has recorded declining export volumes in the last 2 years.