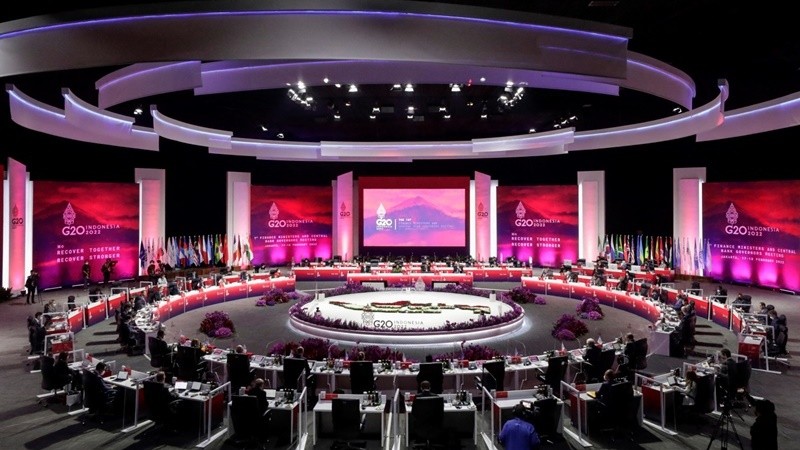 By Dr Venkatachalam Anbumozhi, Director of Research Strategy and Innovation, Economic Research Institute for ASEAN and East Asia (ERIA):  The Indonesia G20 Presidency is a milestone in the country’s active role in shaping the global agenda. As the global economy is slowly recovering from the Covid-19 pandemic, Indonesia has recognized the importance of collective actions and inclusive collaboration by selecting the G20 theme ‘Recovery Together, Recover Stronger’ and picked three key issues - global health architecture, digital transformation, and sustainable energy transition - for the deliberations and final agreement which will affirm G20’s  commitment to the above issues.

Thirteen years ago, in 2008, the G20 moved beyond its previous role of economic crisis management and become a global custodian of social welfare by addressing the   global financial crisis. In this capacity, the 2021 G20 joint agreement called for action to recover from the COVID-19 crisis while also enabling sustainable and inclusive growth. As the premier forum for international economic cooperation, G20 leaders reaffirmed their commitment to overcoming the global health and economic crisis stemming from the pandemic. They agreed upon a shared vision to combat climate change and announced important steps towards the achievement of gender equality. We have also advanced in our common efforts to ensure that the benefits of digitalization are shared broadly and contribute to reducing inequalities.

Since the global financial crisis, the relevance of the G20 has been measured by its results across a number of policy areas. A prominent example is the anti-protectionism pledge adopted during the global financial crisis, which was successful in averting trade wars and capital outflows in 2009. It successfully coordinated large stimulus packages and regulated financial markets. The G20 also helped to bring about the Base Erosion and Profit Shifting (BEPS) initiative to prevent decreasing tax bases, installed an agriculture market information system to reduce food price speculation, and helped to build a consensus on reforming international trade and investment policies. Above all, the G20 has become the most visible forum for ushering the rising powers such as Argentina, China, Brazil, India, Indonesia, South Africa and Saudi Arabia into the global economic governance framework. This has been accomplished in a manner that  acknowledges the fundamental shifts in the global balance of economic power – something that international institutions such as the International Monetary Fund, the World Bank, and the UN security Council were either unable or refused to do. The G20 also developed a structure of observer status and engagement groups that allow non-members such as ASEAN and societal actors like business, think tanks, and labor, to engage with the summit agenda.

However, the relevance of the G20 is at risk of waning.  While the G20 was undoubtedly helpful during the immediate response to the global financial crisis, the current appetite to undertake action on a broad range of global challenges is significantly less clear. The annual rotating presidency of G20 has led to a proliferation of policy initiatives being adopted at the leaders’ summits, which then depend on subsequent presidencies for follow-up.  This format of G20 deliberations may not create sufficient consistency, continuity, or peer pressure to deliver on the relevant policy changes. Additionally, the outreach efforts to expand policy recommendations beyond the G20 were often blurred or depended on leveraging the G20 ‘clubness’ at the expense of non-members. Nevertheless, this G20 peer pressure mechanism has been effective in motivating emerging economies to participate during the summit in order to be accepted as ‘club members’. For example, last year, the Italian G20 focused on Africa and undertook specific initiatives to ensure a greater involvement of African states in various activities of the G20 process. This year the focus can be extended to ASEAN member states.

But can the G20 still count on its ability to engage highly reluctant members? The Italian G20 had to deal with multiple economic and political developments which complicated the outcome of the summit - especially the US- China trade conflicts. The absence of Chinese and Russian Presidents at the 2021 Rome summit reflects the distancing of both countries from the G20 forum. During the 2017 Hamburg summit there had been fear that the final text could be vetoed by the US President who did not take part in a session on trade and could disown the agreement. The US and an increasing number of past G20 Presidencies  have been leaning towards a ‘my country first’ agenda, thus weakening the unanimity in Summit statements, or even the effectiveness of the whole institution. It is far from clear why reluctant members would come back in line with the rest of G20 if each presidency takes a ‘my country first’ approach which undermines the G20’s importance on issues where global cooperation is necessary such as universal health care, climate change, or digitalization.

The G20 Indonesia Presidency comes at a time when a struggling global economy requires big decisions. At the inauguration ceremony, President Joko Widodo called upon his ministerial colleagues and sherpa to promote the aspirations and interests of developing countries while building a healthier and more equitable world governance framework and ensuring that the impacts of their decisions will be felt by the entire community. But it is far from clear how Indonesia will provide the decisive voice needed to set a bold agenda for G20– and then shepherd its implementation.

Indonesia’s G20 presidency’s central task, therefore, must be to establish a framework covering three key areas. First, strengthen the world’s health resilience architecture by mobilizing public and private resources to address health emergencies, purchase lifesaving medicines at affordable prices, and develop mutual recognition of vaccines certificates issued by each country. Second, secure an appropriate agreement on a carbon pricing mechanism to be implemented at the global level in support of international technology transfer and energy transformation for a sustainable recovery. Third, work towards a more inclusive and fairer global digital agenda such as promoting equal access to digital connectivity, enhancing the potentials of Micro small and Medium Enterprises, and developing a digitally skilled community of workforces.

Indonesia should not take a business-as-usual approach to the G20 presidency. If the Bali summit fails to put policy meat on its rhetorical bones, it will risk weaking the relevance of the G20. G20’s very credibility is on the line. Indeed, some in the developed world would prefer a smaller, more exclusive body – a new G7. Such a move would hurt the developing world, especially the emerging Asian economies. One reason why some want a tighter group is that the G20 struggles to achieve consensus. But this misses a point: It is harder to reach agreement precisely because all the key leaders, representing around two-thirds of the world’s population and 80% of global GDP, whose support is needed for any truly global decision.

The Indonesia Presidency, with President Jokowi being one of the longest serving G20 leaders needs to rediscover the activism that G20 displayed in 2008, during the height of the financial crisis. It must be backed up by its major Asian G20 partners like Australia China, India, Japan, South Korea and Saudi Arabia, that tackled the previous crisis and economic recovery with determination, innovation and commitment.

This opinion piece was written by ERIA's  Director of Research Strategy and Innovation and has been published in The Manila Times and The Jakarta Post. Click here to subscribe to the monthly newsletter.