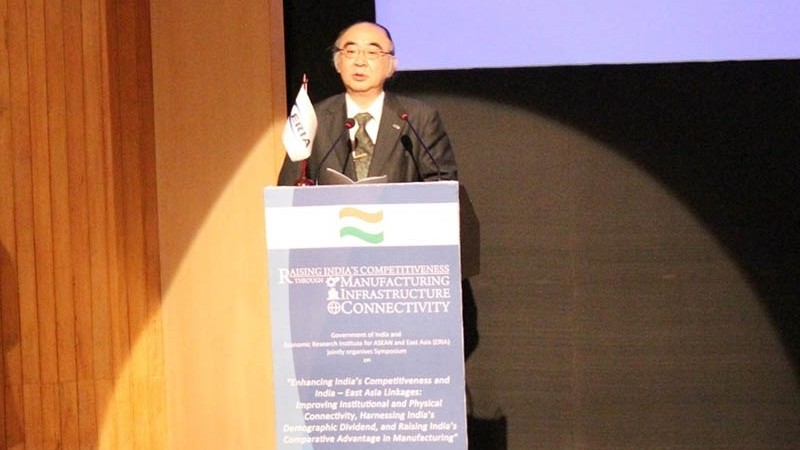 New Delhi--3 September 2014: India under the leadership of Prime Minister Narendra Modi will intensify efforts to improve institutional and physical connectivity with ASEAN to further economic integration with the region and beyond.

The first ever joint symposium was held by Indian Government and Economic Research Institute for ASEAN and East Asia (ERIA), 'Raising India's competitiveness in Manufacturing, Infrastructure and Connectivity was held today in New Delhi.

With its "Look East Policy," India hopes to forge closer economic relations with ASEAN and East Asia through domestic reforms that would facilitate trade and investment. However, the people-to-people connectivity is equally pivotal to strengthen the multidimensional cooperation. Deepening connectivity, strengthening infrastructure and expanding manufacturing for economic growth was the key to enhance India's competitiveness in connectivity with the region.

These were the sentiments echoed during the one-day symposium to enhance India's competitiveness and its linkage with East Asia, which was attended by senior Indian official and experts from India and ASEAN. The symposium was opened with a key-note speaker by H.E. Nguyen Cam Tu, Deputy Minister of Industry and Trade, Viet Nam.

H.E. Nguyen Cam Tu said that the India-ASEAN relations have developed a good foundation for economic growth for the past two decades. Both are also partners of the ongoing negotiation on Regional Comprehensive Economic Partnership. He reiterated that connectivity will further increase economic growth and strengthen the production networks in this part of the world.

Mr. Rajeev Kher said that the trade volume between ASEAN and India will increase from the current $80 billion level with the conclusion of ASEAN-India Trade in Services and Investment.India will intensify efforts to improve institutional and physical connectivity with ASEAN to further economic integration with the region and beyond.

To see the pictures of the event please click on the following PDF file: