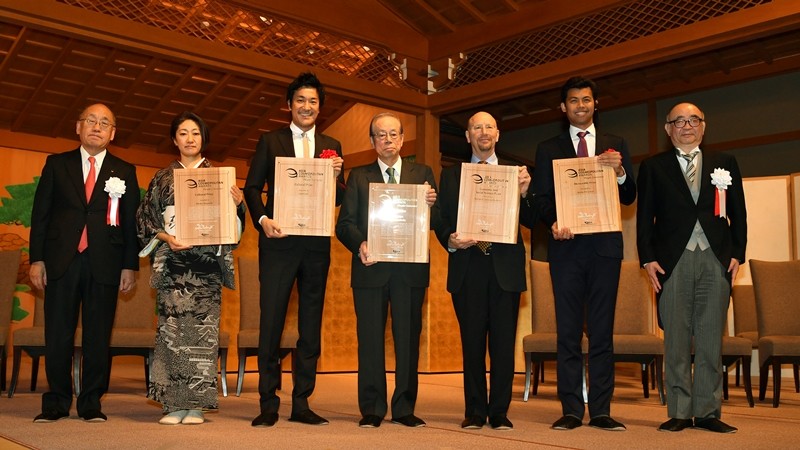 Nara,10 January 2019: Former Prime Minister of Japan HE Yasuo Fukuda received the Grand Prize of the 4th Asia Cosmopolitan Awards (ACA) this afternoon in recognition of his contributions and his leadership with a focus on diplomacy toward Asia to ensure specific actions are taken to achieve ASEAN’s economic integration.

In his acceptance speech, Yasuo Fukuda said, ‘The world has been paying attention to the recent stable development of Asia. I am pleased to be a member of Asia, and at the same time, I think that it is a great mission for Japan to build a relationship to cooperate with the development of the Asian region in the future.’

‘In Southeast Asia, when I served as Prime Minister, I decided to open the Mission of Japan to ASEAN and  establish an Ambassador of Japan to ASEAN, and announced the establishment of The Economic Research Institute for ASEAN and East Asia (ERIA), which are all based in Jakarta, Indonesia. I am looking forward to the activities of these organisations further contributing to the peace and prosperity of this region.’ Yasuo Fukuda added his comments in conclusion to the commemorative year marking the 45th anniversary of ASEAN−Japan relations.

The Economic and Social Science Prize was awarded to Richard E. Baldwin, Professor of International Economics at the Graduate Institute of International and Development Studies, Geneve, for his work in the field of trade policy and economic integration, particularly his work on the ‘third unbundling’. The Cultural Prizes were given to teamLab, Art Collective, and Ms Mieko Noguchi, a glass artist. Dr Surin Pitsuwan (1949−2017), Former Secretary-General of ASEAN received the Memorable Prize for his significant contributions to ASEAN’s development.

On accepting his award, Professor Richard E. Baldwin stressed the growth of the Asian region. ‘The rapid rise of Asia of the last few decades is a truly wondrous, truly historic thing. Hundreds of millions of people have been lifted out of poverty and a new global middle class has been created. Even more wondrous is the fact that this economic progress has been accompanied by peaceful and increasingly deep cooperation among Asian nations,’ he said.

Mr Toshiyuki Inoko, President of teamLab, mentioned that all of their artworks are connected to form a single, continuous, borderless world. ‘We hope to create the beauty of borderlessness and continuity, to blur the boundaries between the world and oneself, and to broaden people’s values, even just a little,’ Mr Inoko said. ‘While making art works,’ Ms Mieko Noguchi noted, ‘I always imagine that people in the world can share their values beyond ethnicity and religion if they have viewpoints, “overviewing the world”, which is one of my understandings of the world incorporated into my art works.’

And last but not least, Mr Fuadi Pitsuwan, on behalf of his father Dr Surin Pitsuwan, introduced his contribution. ‘What I am working on is to establish a foundation in my father's name which I hope will continue the work that my father had done in a private capacity.’

This award aims to recognise on a biennial basis individuals(s) or organisation(s) that have made substantial and significant contributions to the development of a peaceful and stable East Asian Community, to narrow the development gaps in the region, as well as to establish sustainable social growth towards cultural and economic integration within the region. ‘The Asia Cosmopolitan award strives to become the East Asia Nobel Prize,’ commented Professor Hidetoshi Nishimura, President of the Economic Research Institute for ASEAN and East Asia (ERIA).