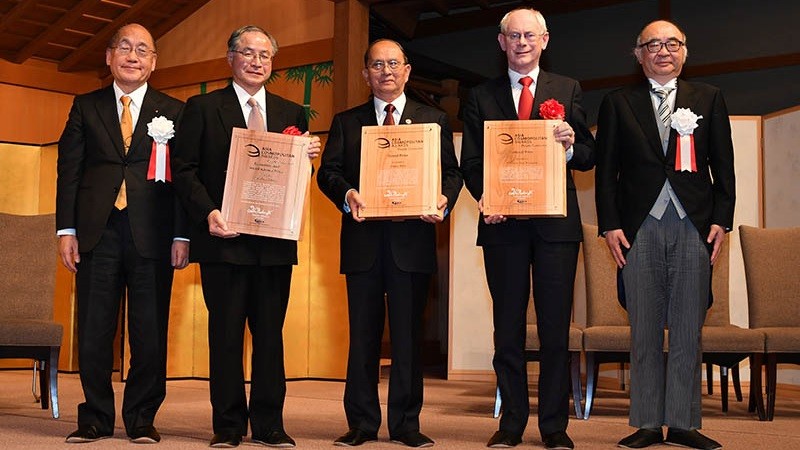 Nara-15 January 2017: Former President of Myanmar HE U Thein Sein received the Grand Prize of the 3rd Asia Cosmopolitan Awards (ACA) this afternoon in recognition of his contributions to his country's reform efforts and democratization under his leadership.

In his acceptance speech, Thein Sein said as Myanmar's president, "I want my country to be a peaceful and prosperous democratic country. To create a better future for the younger generations. To become a developed country which can share its wealth to Asia."

"The growing democratization in the country has led to increased recognition from the international community and the end of sanctions," Thein Sein said adding that Myanmar has contributed to peace and prosperity in ASEAN when the country served as the chair in 2014.

The Economic and Social Science Prize was awarded to Professor Masahisa Fujita of Konan University for work in the field of Spatial Geography. The Cultural Prize was given to HE Herman Van Rompuy, the first full time President of European Council and an accomplished Haiku poet, for his Haiku poetry.

In accepting his award, Professor Masahisa stressed the need for a spatial geography that addresses ethnic and cultural issues. "We live in a time when the globalizing world is facing many challenges including especially increasing income gaps for many advanced countries which cause serious social problems."

These differences, he added, have become areas of friction especially in the less developed regions of the world. "I hope my research will make a more inclusive and fair society," he said.For HE Professor van Rompuy, the Asia-Europe relations are not based on only economics but also on shared human values. "Culture is often a more solid basis for a lasting relationship than only trade and investment," he reiterated.

Apart from being a cultural link between Europe and Asia, he emphasized the power of Haiku as a poetry of harmony that can bring people together. "In today's world we need truth, goodness and beauty." He added Haiku is about authentic experiences, not about fake feelings.

This award aims to recognize on a biennial basis individuals(s) or organization(s) that have made substantial and significant contributions to the development of a peaceful and stable East Asian Community, to narrow the development gaps in the region, as well as to establish sustainable social growth towards cultural and economic integration within the region. "The Asia Cosmopolitan award strives to become the East Asia Nobel Prize," commented Professor Hidetoshi Nishimura, President of the Economic Research Institute for ASEAN and East Asia (ERIA).