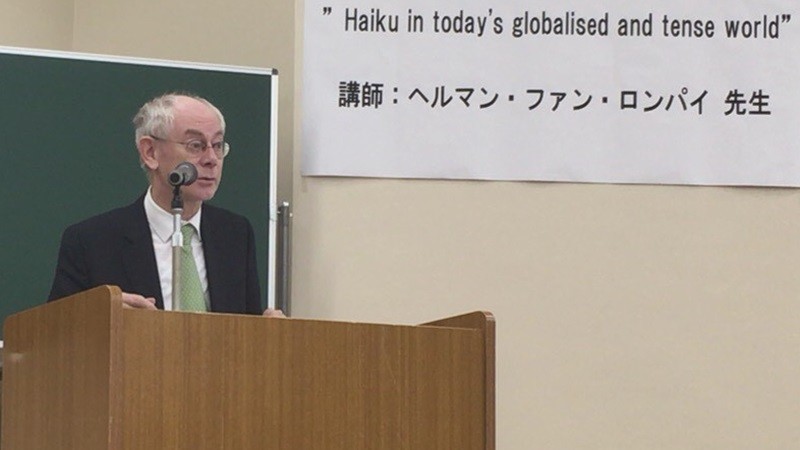 Nara, 16 January 2017 - Haiku is no longer the monopoly of Japan, it has become an international phenomenon which should be recognised as a UNESCO Intangible Cultural Heritage, according to H.E. Herman Van Rompuy, the first full-time President of the European Council, an accomplished Haiku poet from Belgium, and the winner of the Cultural Prize in the 3rd Asia Cosmopolitan Awards.

'To me, it is a de facto UNESCO heritage because you can write Haiku in any language of the world,' he said at Nara University in a lecture titled 'Haiku in Today's Globalised and Tense World' attended by 260 students and members of the media.

The day before, H.E. Van Rompuy received the Cultural Prize in the 3rd Asia Cosmopolitan Awards in recognition of his contribution to Haiku at an award ceremony organised by the Economic Research Institute for ASEAN and East Asia in cooperation with the Nara Prefecture held at Nara Kasugano International Forum IRAKA, Noh Theatre and attended by 350 participants including diplomats.

He praised Haiku for its ability to explain complicated matters in the world through its simplicity. Haiku's spread to Europe from Japan is relatively recent, but is already increasingly incorporated into the system of thought of Europe. 'Haiku can express the preciousness of peace and everybody can easily recite this short poem format,' he said.

Coming from Europe and given the current global situation, he said that when people interact from their hearts, beyond the pursuit of mere economic profit, it creates a foundation for accepting the movement and engagement of people. 'It is important to bring harmony through beauty,' he said, adding that Haiku has the capacity to accept different cultures and natures while respecting diversity.

H.E. Van Rompuy, who has published two books in his Haiku collection, said that the world today needs 'truth, goodness and beauty. Haiku is about authentic experiences. Not about fake feelings.'

He ended his lecture citing one of his Haiku poems from a speech he gave when he received a Nobel Peace Prize in 2012 on behalf of the European Union titled 'Peace':