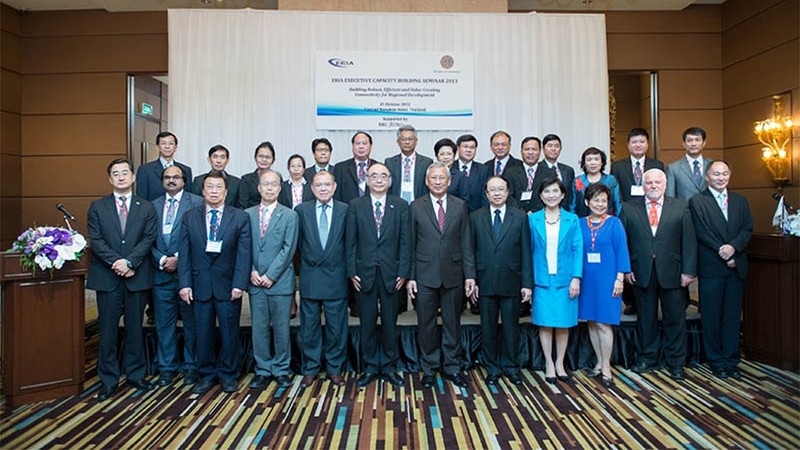 It was organized together with the Ministry of Commerce, the Kingdom of Thailand and supported by Bangkok Research Center (BRC), JETRO Bangkok, which started with the Executive Capacity Building Seminar "Building Robust, Efficient and Value Creating Connectivity for Regional Development" in Bangkok, Thailand on October 21, 2013.

In order to nurture strong leadership in the region for economic integration and to secure an intellectual basis for the development of CLMV countries and other developing areas in East Asia, it is important to improve the capacities of policy?makers, administrators, researchers and business managers. Deputy Director Generals (DDGs) of various line Ministries/Departments of governments from five countries, Thailand and CLMV countries (Cambodia, Lao PDR, Myanmar, Vietnam), who will become the key role players in the development of the region, are invited to the 5 days Seminar and Workshop in Bangkok, Chiang Mai and Chiang Rai, Thailand from October 21 to October 25, 2013. The program aim to offer an opportunity to share experiences, academic findings and empirical practices, and to build network among participants. This is the first event DDGs from five countries are invited together to discuss about regional issues of connectivity and regional development.

"To support ASEAN connectivity, ERIA has shown high commitments in drafting and implementing the Master Plan for ASEAN Connectivity (MPAC). The Comperhensive Asia Development Plan (CADP), as one of our contributions to ASEAN Connectivity, was submitted to the 5th East Asia Summit where ASEAN Leaders adopted MPAC. Both claimed strategic combination and prioritization of hard and soft infrastructure projects would deepen economic integration as well as narrow development gaps in the region", Prof. Hidetoshi Nishimura, Executive Director of ERIA highlighted the ERIA 's research activities on regional connectivity.

Development of infrastructural connectivity in GMS (Greater Mekong Subregion) will be the key to regional economic growth. Deputy Prime Minister H.E. Niwattumrong Boonsongpaisarn in his welcoming remark, said as the regional, Thailand will invest intensively in improve the connectivity in the mainland Southeast Asia. "In the future, people in this region will be able to see each other and travel more," he said.

His message was well echoed by H.E. Olarn Chaipravat, Thailand Trade Representative, who reaffirmed Thailand's future connectivity plan would be concentrated on linking Yunnan with Lao PDR, Myanmar, Thailand, Vietnam as well as Malaysia. He pointed out that the Thai 2.2 trillion baht (US$700 million) infrastructural program is aimed at improving connectivity within the region. "Thailand will build a high speed system to move people and products and serve as the hub," he said.

H.E. Supachai Panichpakdi, former Secretary General of the UN Conference on Trade and Development, concurred in his keynote speech that the connectivity of production chain has contributed to rapid economic growth in the region. He expressed the hope that in the next decade, the number of less developed countries would be halved from the current 50 countries. He added that developed countries must address issues related to income distribution to ensure that there will be equitable development.

Beginning today, a total of 60 participants including 15 representatives at the DDG level from Cambodia, Lao PDR, Vietnam, Thailand and Myanmar joined the seminar, and the DDGs continue the program of five days (21-25 October 2013) to exchange views and map out their common strategies in future connectivity.

Since its inception in 2008, ERIA has been providing valuable inputs to the decision makers in ASEAN members and East Asia. ERIA also organizes numerous capacity building-programs for new members of ASEAN.