Four Narratives of ASEAN that Makes It Unique at 50 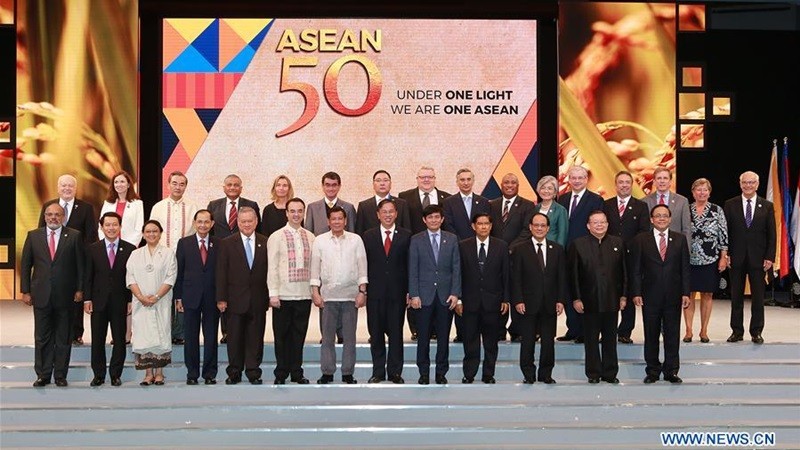 The Association of Southeast Asian Nations (ASEAN), which observes the golden jubilee of its foundation on 8 August, has come a long way in making a significant contribution to peace, security and prosperity. Now, when its future prospects and centrality approach look uncertain, it has four narrative stories to tell and two contrasting models to choose.

On 8 August 1967, this regional grouping came into being with a membership of five countries, Indonesia, Malaysia, Philippines, Singapore and Thailand. Between 1984 and 1999, five other nations, namely, Brunei Darussalam, Viet Nam, Lao PDR, Myanmar and Cambodia, joined it to make it an association of 10 states.

It is unique in its essential character for it is different from the European Union (EU). Unlike the EU, ASEAN is not a supra-national organisation. It may be recalled that ASEAN previously set for itself the goal of graduating to an ASEAN Community by 2015, a programme that was launched with three specific pillars-- political-security, economic, and social-cultural -- promised as a comprehensive umbrella of functions. The grouping's member governments all agreed on the roadmap that promises to take them to their common destination.

In the past, Southeast Asia has always been a region with a divided, sprawling culture. But for most of the past 50 years, it was held together by a unifying story. It was the story of accelerated economic growth, social progress and cultural development to provide regional peace and stability.

ASEAN's success was the story of leaving mutual suspicion, venturing into a wilderness and creating a new promising future for its citizens. That story rested upon amazing levels of consultation, compromise and consensus -- 'the ASEAN way'. And there are four narratives of the ASEAN way.

The first one is a story of multi-cultural ASEAN. It sees ASEAN citizens as members of groups, whose status is largely determined by their nationalities and their socio-cultural backgrounds. This multi-cultural narrative dominates ASEAN's community building process and educational systems. It makes the product of these social capital creations -- the students, the future citizens of ASEAN-- more able to think in terms larger than their own identity group, which means they can find common ground or effective arguments that can reach people of different background, in the future.

The second narrative concerns a globalised ASEAN. This narrative is dominant in urban centres and industrial parks. This story comes with an exhilarating ideology of economic integration, supported by regional production networks, that flattened economic hierarchies, strengthened local supply chains, discarded old elites and empowered low- to middle-income families and individual workers. But in real life, when you disrupt old structures, you end up concentrating power in fewer hands. This narrative work well for people and industries who well prepared for competition, but not so well for most others.

The third one is the liberation but people-centred narrative that dominates ASEAN as a land of free nations and individuals responsible for their own fate, both economically and socially. This story celebrates the dynamism of the economic integration that fulfils the social aspirations and hopes of the people. Its prime value is economic freedom and environment sustainability, which in default brings human centred progress, by regarding ASEAN as a community of entrepreneurs, taxpayers, consumers and workers -- indeed everything except citizens.

The fourth is the narrative of ASEAN centrality, in which the regional grouping was at the centre of an array of regional institutions involving partners in East Asia and beyond, such as the ASEAN+3 forum (a cooperation venture between China, Japan and South Korea), the ASEAN Regional Forum, the Asia-Europe Meeting, and the East Asia Summit.

ASEAN centrality is the conviction that has brought a new identity because of unity and strength -- the unity in elite decision-making, which has no allegiance to a central authority, but evolves through consensus and self-confidence.

Maritime and territorial disputes have threatened ASEAN unity and centrality. But this story is always forward looking, pragmatic and optimistic. The narrative may have some contempt for democratic norms and liberal values, but stabilises the very idea of an objective ASEAN.

To take an objective view, ASEAN in the past 50 years has made significant contribution to peace, security and prosperity in the region. The grouping has many socio-economic and political achievements to its credit, but challenges are plentiful too. With a population of 628 million and a combined GDP of US$2.4 trillion, it is the world's seventh-largest market and third-largest labour force, and is projected to become the fourth-largest economic bloc by 2030.

Mari Pangestu, a former Indonesian minister, told a forum held by the Economic Research Institute for ASEAN and East Asia that the grouping is now threatened by a slow recovery in the global economy; increased anti-globalisation, anti-immigration and anti-elite sentiments; disruptive technologies that threaten job growth; and expanding demographic shifts.

She recommends that it 'speed up and widen the scope of regional economic integration'. But does ASEAN have the requisite will to execute this? All of the four narratives provide a viable basis for successfully tackling this challenge. But the future of ASEAN will be a competition between two other stories, which are sort of descended from the existing four.

The first is the mercantilist model, which sees ASEAN not as the culmination of history and socio-culture but as one more economic power in competition with neighbouring economies like China, India, and so on. In this, being ASEAN implies being a member of an economic clan, and the ideal ASEAN member states and its partners are purely protectors of this clan.

ASEAN governments and corporations work together with their citizens and partners by closely controlling trade, investment and immigration. ASEAN's wealthy states would have an incentive to share their resources with workers, because they need them to fight off competitive economies.

The second is the empowered community of ASEAN. This story sees the regional grouping as a melting pot of all socio-economic and political cultures and human history's greatest laboratory for the cultivation of new talents, skills and abilities.

This model welcomes diversity in education, pluralistic views on innovation, open trade, meritocracy, and immigration for all the dynamism these things unleash with ASEAN centrality. This model heavily invests in social capital, especially the young and those who suffer from the downsides of creative destruction and the ASEAN community-building process. In this model, every young boy and girl of ASEAN is enmeshed in the state's care to arouse his or her inherent energy and propel social mobility.

The mercantilist model sees ASEAN as a mighty economic fortress in a treacherous world. The empowered community model sees the grouping as a creative crossroads leading an open and fundamentally harmonious world. The empowered model will be an exodus story for ASEAN member states as well as other countries that are struggling to nurture and strengthen the roots of deepened regional cooperation.

This opinion piece has been published in the Jakarta Post, the Japan Times, the Myanmar Times, the Bangkok Post, China Daily Asia Weekly. These opinions are his own and do not necessarily represent ERIA.Click here to subscribe to the monthly newsletter.