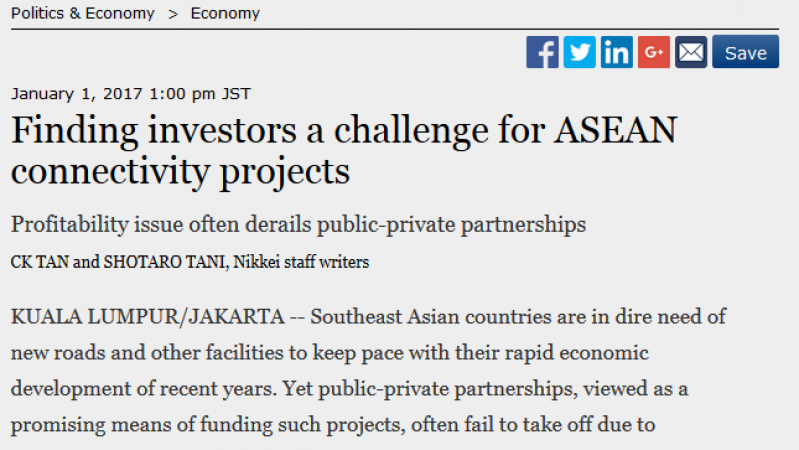 KUALA LUMPUR/JAKARTA -- Southeast Asian countries are in dire need of new roads and other facilities to keep pace with their rapid economic development of recent years. Yet public-private partnerships, viewed as a promising means of funding such projects, often fail to take off due to uncertainty over profitability.

"What are you waiting for? You should kick-start one or two pilot projects to keep the ball rolling," a Malaysian official told a representative from the Association of Southeast Asian Nations at a meeting on regional connectivity in Kuala Lumpur in November.

ASEAN, with the assistance of the World Bank, has identified 40 priority projects across the region. It estimates that an annual $110 billion in infrastructure investment is needed to bridge the gap between developed and emerging economies in the group.

But once individual countries start discussions toward implementation, the ASEAN Secretariat's priorities are often ignored.

These projects, part of the Master Plan on ASEAN Connectivity 2025, are to be implemented through public-private partnerships. The plan was adopted by ASEAN's 10 member countries in September, succeeding one that ended in 2010. It focuses on five strategic areas: sustainable infrastructure, digital innovation, seamless logistics, regulatory excellence and people mobility. It is meant to complement the ASEAN Economic Community that aims to ease the movement of goods and people under a regional integration initiative that began in late 2015.

Even so, many of these infrastructure projects attract only limited private financing because they do not generate returns in the short to medium term.

"There are not enough bankable projects," an ASEAN Secretariat official lamented. As such, ASEAN has approached the World Bank and the Asian Development Bank for funding.

But some experts disagree, arguing that governments are unable to tap available liquidity simply because they lack expertise in preparing the bidding process and marketing it to the private sector.

"It really depends on how governments sell the projects to investors," said Fauziah Zen, an economist at the Economic Research Institute for ASEAN and East Asia in Jakarta.

Public-private partnership infrastructure project investment in Asia has yet to recover to the levels before the Asian financial crisis of 1997, the CIMB ASEAN Research Institute said in a 2015 report, citing World Bank data. Private-sector involvement in infrastructure in the region totaled $36 billion in 1997 but dropped to nearly $10 billion the following year. It has since improved but now hovers between $10 billion and $20 billion.

Zen, an expert in public finance, said some governments, like Indonesia, wanting fast action have resorted to awarding projects to state-owned enterprises.

"If it is given to the SOE, then what is left for the private sector?" she asked.

Despite the importance of these projects to the economies involved and in helping trade liberalization under the AEC, ASEAN has been dragging its feet because of domestic political developments in Malaysia, the Philippines and Thailand, HSBC Global Research said in a Dec. 13 report on the region.

"The ASEAN Secretariat is notoriously unable to enforce AEC implementation, and the focus on unanimous consensus slows the decision-making progress," the banking group said.

One way to resolve the funding issue, suggested by economist Zen, is through project bonds accessing the institutional bond market as a source of financing. Loans from traditional banking institutions tend to be more expensive for infrastructure projects that are often long-term in nature.

"When it is project bonds, investors look at the project feasibility and prospect," she said. The officials involved will be compelled to find ways to prepare the project papers in order to attract potential investors.

He said investors will be encouraged if these projects are listed in markets that are transparent and with ample liquidity. "There are so many pension funds looking to invest in long-term assets to match their long-term liabilities, but they want those assets to be placed in a country where they are confident about the rule and regulation where they can get out when they want sell," said Majid.

In any case, the region clearly needs strong leadership to push forward the plans mapped out for integration. HSBC sees "some hope" that Philippine President Rodrigo Duterte will do ASEAN a favor in its 50th-anniversary year of 2017.

"After all, it is in the interests of the Philippines to promote services liberalization given its sizable surplus labor force, much of which is trained in professions such as nursing, which is in high demand in other ASEAN economies," the bank said in its report.