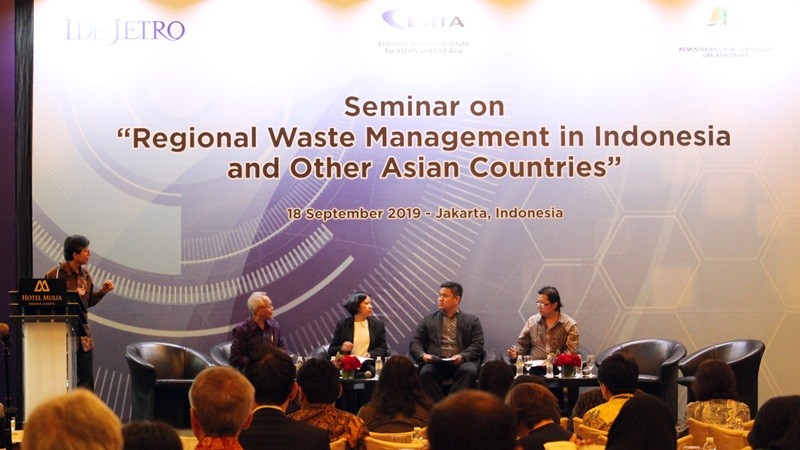 Jakarta, 18 September 2019: Experts in waste management issues, private sector, and policymakers attended a seminar on ‘Regional Waste Management in Indonesia and Other Asian Countries’ in Jakarta on 18 September 2019, organised by the Economic Research Institute for ASEAN and East Asia (ERIA), Institute of Developing Economies Japan External Trade Organization (IDE-JETRO), and the Ministry of Environment and Forestry of Indonesia.

In his opening remarks, ERIA’s Senior Economist Michikazu Kojima conveyed his concern about the rapidly increasing amount of plastic waste in Asian countries. He highlighted the urgent need to enhance waste management practices, which can be implemented through improving the management of waste disposal and collection. The opening session was followed by a presentation from Dr Novrizal Tahar, the Director of Waste Management from the Ministry of Environment and Forestry. In his opening remarks, Dr Tahar stated that comprehensive regulations and individual actions should go side by side to make a difference in order to reduce waste.

The seminar was divided into three main sessions, each with different topic discussions. The first session discussed the practice of regional waste management in Indonesia and other Asian countries. In this opportunity, Dr Vella Atienza from University of the Philippines, Los Baños and from Loei Rajabhat University shared their experiences in dealing with regional collaboration on waste management in the Philippines and Thailand. Reflecting from what has been happening in both countries, the speakers agreed that financial support is crucial to perform a proper waste management.

The Government of the Philippines and Thailand encouraged as a tangible solution of high cost of waste management, which requires several municipalities to form  joint waste management and treatment sites. Such an action has successfully been proven to not only reduce the cost of investment, but also covers a wider service area. However, the implementation of clusterisation has to consider the opinion of local people, who might oppose the location of the waste disposal area because of their concerns about environmental and socio-economic impacts.

In the panel discussion session, Kian Siong from the World Bank was impressed by the existence of local regulation in the Philippines on waste collection. He added that it would be a good example for Indonesia to have similar regulations at the level of Kecamatan and Kelurahan. In terms of funding, Dr Petkanjanapong stated that the commitment of the national government of Thailand to support the public private partnership (PPP) scheme has encouraged private companies to use bank loans, leading to more investment on regional waste management. In Thailand, although the waste is the property of the state, private companies have the right to make money out of it under PPP scheme.

The topic for the second session was ‘challenges of regional waste management in Indonesia’. Ms Kati Darto and Mr I Made Sudarma delivered their presentations with examples from the implementation of regional solid waste management in Mamminasata, South Sulawesi and Denpasar, Badung, Gianyar, and Tabanan (Sarbagita). In this topic, Kati Darto explained that there were eight major problems that led to cancellation of Mamminasata regional solid waste management in 2014. The problems are assets, institutions, tariffs, compensation, cooperation among local governments, cooperation with private sector, funding, and political support. Mr Sudarma, a former head of the Sarbagita regional waste management, mentioned that the problem in Sarbagita was caused by the reluctance of the government to allow the tipping fee charged by the private sector for the acceptance of an amount of waste for disposal  since they considered that . However, Mr Sudarma believed that this mindset should be changed.

‘The government always thinks that waste is similar to coal. However, in waste management systems, waste is supposed to be used for saving the earth, not for gaining energy,’ said I Made Sudarma.

The session continued with presentation from Mr Eddy Satriya from the Coordinating Ministry of Economic Affairs. He stated that the Government of Indonesia has undertaken many actions to reduce waste.   Analysis of past trends shows that waste-to-energy programmes have become the preferred solution for waste management in this country. However, Mr Satriya argued that the agreement to run a waste-to-energy programme can be risky because municipalities have to ensure that there is a steady amount of garbage supplied to the power plant. This problem is amplified by the current waste reduction efforts to encourage individuals to reduce their waste.   During the panel discussion, Mr Gun Gun Saptari Hidayat from Bandung Cleanliness Enterprise stated that the problem was not about technology. Instead, the problem is about different perceptions from different levels of decision makers. In this regard, Indonesia should have a single standard for waste management,

The last session discussed the Public-Private Partnership (PPP) scheme for regional waste management. Mr Triharyo Soesilo from The Committee for Acceleration of Priority Infrastructure Delivery said that the implementation of PPP schemes frequently face barriers in formulating ‘which set out the preliminary thoughts regarding a proposed project. However, support from international institutions can help address this problem. In the second presentation, Mr Edi Bahtiar from the West Java Regional Waste Management Division indicated that PPP schemes can result in higher financial support since there would be more investors that are interested to run the project.

In his presentation, Mr Keitaro Tsuji from Japan International Cooperation Agency (JICA) discussed how waste-to-energy development should be included in infrastructure programmes because it is one of the 37 national priority projects under Presidential Decree 35/2018. By implementing this setting, the funding for waste-to-energy project can be secured because it has the full support from the government through PPP scheme.

Lastly, Mr Agus Iman Solihin from PT Sarana Multi Infrastruktur Persero (SMI) said that PT SMI serves as a catalyst of infrastructure acceleration in Indonesia since it provides continuous funding for PPP projects. In this case, government support holds a crucial role to improve the attractiveness of waste-to-energy projects for investors. Prof Enri Damanhuri from the Bandung Institute of Technology closed this session by stating that waste management issue in Indonesia is tremendously complicated, which has caused many regions to suffer.

In his closing remarks, Mr Kojima stated that Indonesia has opportunities and challenges at the same time. He added that ERIA would help to formulate policy recommendations that would be delivered to relevant stakeholders in order to overcome the complex regional waste management issue in Indonesia.