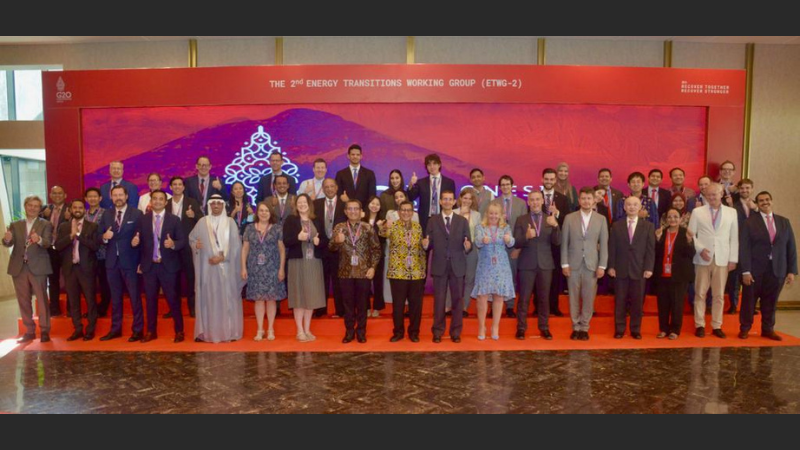 The G20 Energy Transition Working Group (ETWG) organised by the Ministry of Energy and Mineral Resources of the Republic of Indonesia is one of the 13 working groups that are part of the sherpa track.

Working within the energy transitions pillar, the ETWG aims to strengthen global sustainable energy systems and just transitions, while accelerating efforts for achieving SDGs and mitigating the adverse impacts of climate change.

Building on the ETWG’s objectives and the findings of the first ETWG meeting organised in March in Yogyakarta, the second meeting took an important step to prepare the deliverables for the proposed G20 global deal on energy transitions focusing on the elaboration of Common Approaches to Accelerating Clean Energy Transitions (COMPACT); analysing a stocktake on the three priority areas, i.e., securing energy accessibility, scaling up technology.  Financing was emphasised as a critical enabler for energy transitions, and the meeting put forth a multi-year roadmap of G20 collective actions in the three priority areas and building blocks for the ministers’ communique.

ERIA was represented in person by Dr Han Phoumin and Dr Alloysius Joko Purwanto who presented on the second priority area: scaling up smart and clean energy technologies.

Discussing the theme of ‘The Role of Carbon Capture, Utilization and Storage (CCUS) and Natural Gas in G20 Region, Dr Han explained the necessity of adopting multiple pathways including CCUS as it has an important role for carbon sinks and helps to decarbonize emissions in economic sectors where abatement is challenging. The G20’s actions can include setting up total and sectoral targets of avoided carbon dioxide emissions through CCUS, boosting research and innovation, creating more windows of financial opportunity for developing countries, improving regulations in the oil and gas sector, developing CCUS value chain networks, and continuing capacity building and knowledge sharing activities on CCUS.

Dr Phoumin concluded with a brief explanation about the Asian CCUS Network, which ERIA coordinates, as a platform that provides opportunities for countries in Asia to collaborate to build countries’ capabilities to lower the cost of CCUS technology and its deployment through the collaboration of research and innovation.

On the role of natural gas in G20, Dr Purwanto described the importance and crucial role of natural gas in fulfilling basic and universal energy needs especially in the developing and emerging economies, in ensuring energy security in the current situation marked by geopolitical tensions, and in facilitating penetration of renewable electricity and the more advanced technologies such as CCUS and energy, namely hydrogen and ammonia.

Based on that rationale, G20 actions might consist of acknowledging the pivotal role of natural gas, especially by promoting coal-to-gas switching in the power sector, as the flexible baseload for renewable electricity and in cofiring with hydrogen and/or ammonia. For the developing and emerging economies, G20’s actions can consist of increasing financial support for natural gas development and providing capacity building to promote the creation of gas spot markets.

The third or the last G20 Energy Transition Working Group meeting will be held in Bali, 30 August to 1 September 2022.

With Ministerial Meetings and Engagement Groups, the Working Groups are parts of the activities and work in the framework of the Indonesia G20 Presidency. The pinnacle of the G20 process will be the 17th G20 Heads of State and Government Summit taking place in November 2022 in Bali.