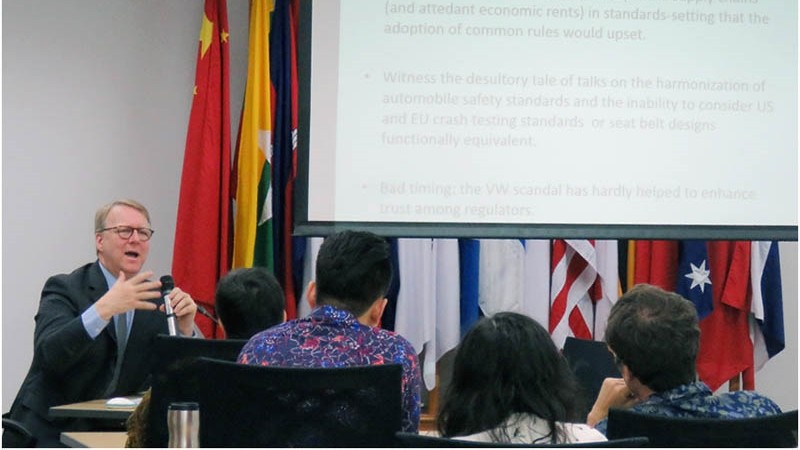 Pierre started his presentation by quoting Donald Tusk - President of the EU Council and Cecilia Malmstrom - European Commisioner for Trade, and pointed out that highest level of government has committed to conclude the TTIP.

He also referred to the fact that 13 formal negotiating rounds have taken place and significant capital and resources are being spent by both sides of the Atlantic. Pierre also stated that the TTIP accounts for more than 45% of global output, more than a third of global trade and over two fifths of aggregate foreign direct investment activity. Therefore, he predicted that even elimination of smallish tariffs on a huge volume of bilateral trade can generate significant savings.

As a discussant, Dr. Lurong Chen of ERIA provided a feedback to Pierre's presentation. Dr. Chen presented the fact that nowadays mega-regional FTAs are rising such as the Trans Pacific Partnership (TPP) and the TTIP. He argued that these FTAs are reaction of countries to the stalemate in the multilateral negotiations amid the emergence of new trade issues which require new rules. Read the full UPH Press Release.