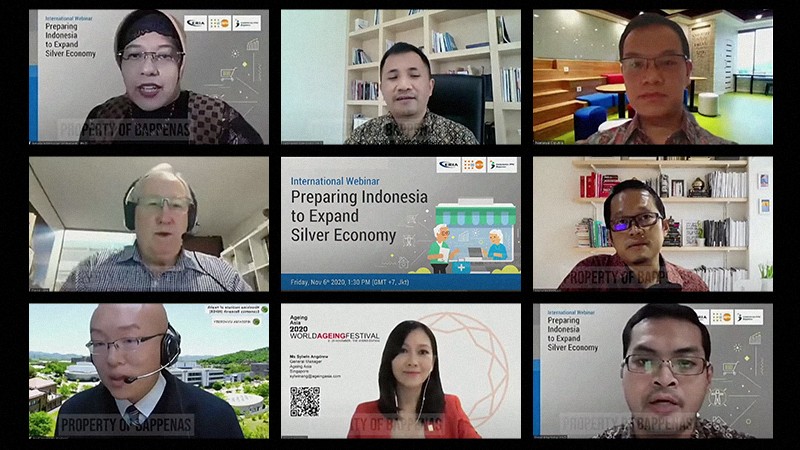 Virtual, 6 November 2020: The Economic Research Institute for ASEAN and East Asia (ERIA) supported an international webinar hosted by Indonesia’s Ministry of National Development Planning (BAPPENAS) on the topic of ‘Preparing Indonesia to Expand the Silver Economy.’

The virtual event, held on 6 November 2020 together with the United Nations Population Fund, aimed to discuss the best practices of silver economy development implemented by Australia, Singapore, and Japan as well as disseminate the opportunities and strategies of the silver economy in Indonesia. A discussion regarding the role of the private sector within Indonesia’s silver economy expansion plans was also covered during the webinar.

In 2020, there are nearly 28 million older people in Indonesia aged 60 years and above, and by 2040, the number is expected to more than double to 57 million older persons in the country. While an ageing society places the burden on the shoulders of the labor force, harnessing the economic potential of Indonesia’s older population can significantly contribute to the national economy.

Indonesia stands a chance to reap numerous economic and social benefits from the silver economy if it can establish a concrete foundation for this multi-faceted sector. The silver economy harbors massive opportunities especially considering the outlook for Indonesia to be the second-largest silver economy in the world after China in 2030.

In her Opening Remark, Dr Amalia Adininggar Widyasanti, Ph.D., as Acting Deputy Minister for Economic Affairs at BAPPENAS, highlighted the need to view the silver economy as an opportunity instead of a problem stating that ‘the ageing society can be a major opportunity for our economic growth and for job creation if we can clearly identify the new sources of economic engines that can drive expansion in the economic output.’ The multi-sectoral characteristic of the silver economy thus requires a collaborative effort to take advantage of this key source of Indonesia’s engine of economic growth in the future.

Event speaker, David Lane, the Australian Silver Industry Group, Queensland, Australia, stressed the need for the Indonesian government and government organizations to be ‘realistic, but authentic and unique’ in developing the silver economy. Mr Lane advised that the government observe, learn, and adapt other countries’ solutions concerning the response to the ageing population.

Japan is an example of a country that has a well-established industry to cater to the demands and needs of its older population coupled with strong bilateral relations with Indonesia in terms of sending care workers. The lessons Indonesia can take away from Japan’s experience, outlined by Prof Yoshihiko Kadoya, Ph.D. from Hiroshima University, Japan, is to improve the productivity of care workers.

More productive and high-skilled care workers in a country will improve the level of care quality which will unleash the advantages of the silver economy as younger people are given better reassurance of their later years as an older person. Prof Kadoya stated that Japan has not met its productivity enhancement policy as the government inadequately invested in research and development to improve productivity and underinvested in technological solutions. As such, Prof Kadoya recommended that the Indonesian government learn from Japan’s setbacks and remain focused on creating high-skilled, adept care workers to harness the advantages of the silver economy. As Prof Kadoya asserted throughout his presentation, ‘Productivity is important for a happy silver economy.’

It is crucial for Indonesia to provide services and facilities which accommodate its ageing society given that its silver economy market will be worth $7.5 billion by 2025, according to Sylwin Angdrew as General Manager of Ageing Asia, Singapore. Ms Angdrew shared a wide array of possibilities behind an ageing society in Indonesia including business opportunities in care technologies, virtual care, rehabilitation tourism, and senior living and care communities.

Ageing Asia’s research has found that older people are willing to pay to improve the quality of how they age beyond health and medical services, thus Ms Angdrew underscored the need to make available products and services that are friendlier to the older population.

Ciputra Group’s CitraPremier Premium Seniors Club is one example of such services where older people have access to daily activities, older people facilities, and dedicated staff to keep them active and vital. However, Naraya Ciputra Sastrawinata, Director of Ciputra Group Indonesia, called for stronger government socialization and support for senior care facilities in Indonesia.

Based on his assessment, the Indonesian government has insufficiently encouraged the private sector to be involved in strengthening the silver economy or in accommodating the older population in comparison to government measures undertaken in Australia and Japan with their respective successes in supporting its ageing societies.

Another aspect that Indonesia must work on to ensure a robust silver economy in the future is to obtain more data about its older population to better understand their needs in sustaining their lifestyle and livelihoods, as highlighted by Leonardo AAT Sambodo, Ph.D, Director for Industry, Tourism and Creative Economy at BAPPENAS.

In his Closing Remark, Dr Maliki mentioned the urgency for the Indonesian government to improve the availability of quality services for those needing long-term care and those who are healthy as the country became an ageing society in 2019.

With a rapidly ageing population expected in the medium-term, it is essential for Indonesia to prepare itself in becoming an advanced ageing society by creating an inclusive environment, identifying the demands of the older population, and incentivizing the private sector to partake in this untapped market.