ERIA Renews MoU with OECD in a Virtual Signing Ceremony 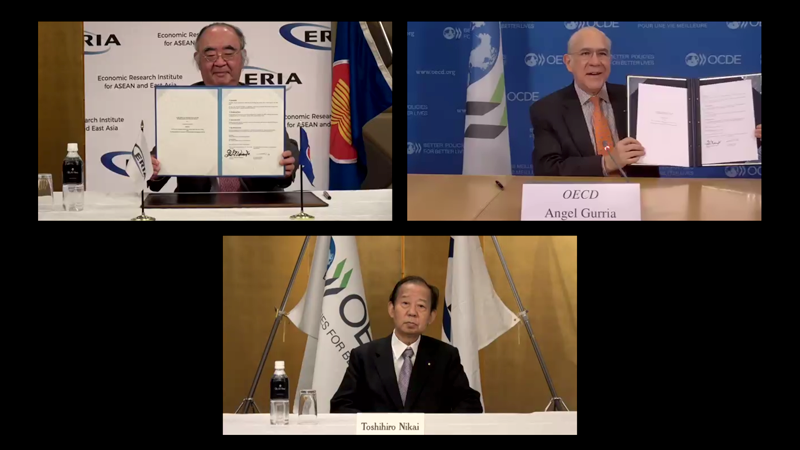 Tokyo/Paris, 28 April 2021: The Economic Research Institute for ASEAN and East Asia (ERIA) and the Organisation for Economic Co-operation and Development (OECD) signed the second renewal of the Memorandum of Understanding (MoU) between the two organisations, putting more emphasis on a variety of research topics such as the environment, social development, SMEs, green growth, infrastructure, and connectivity.

The signing ceremony between OECD Secretary-General Mr Angel Gurria and ERIA President Prof Hidetoshi Nishimura was witnessed by the Chairman of the Parliamentary League for OECD/ERIA and Secretary-General of Liberal Democratic Party of Japan H.E. Mr Toshihiro Nikai, who contributed to the creation of ERIA.

‘Now that effective policies are required in all countries, including the East Asia and ASEAN regions, where economic growth is remarkable, it is more important than ever for organisations such as the OECD and ERIA to cooperate and deepen cooperation,’ said Mr Nikai. ‘We hope that the OECD and ERIA will play an important role in the economic recovery from the pandemic caused by the new coronavirus.’

In his remarks, Prof Nishimura recounted the projects and collaboration that ERIA and OECD had developed together.

‘Based on the MoU, ERIA and OECD have cooperated on research and policy proposals in various fields related to economic integration in East Asia, such as the development of the ASEAN SME Policy Index and the ASEAN Trade Facilitation Indicators,’ stated Prof Nishimura, adding that both organisations had presented the prospect for East Asia’s economic development on the sidelines of the annual ASEAN Summits. ‘Last year, for example, in the forum with OECD, we discussed the idea that ASEAN's efficient international production network had contributed to suppressing negative COVID-19 impact and that this could be a model for the era of the New Normal. ERIA offered this idea as input for the East Asia Summit leaders and ministers.’

To commemorate the occasion, Prof Nishimura cited a haiku, a Japanese short-form poetry, which he wrote himself.

Mr Gurria acknowledged the success of the ASEAN SME Policy Index, saying that ‘the Index has become an important reference within the ASEAN system for measuring [the] progress of reforms in areas such as SMEs and innovation policies, SMEs and women entrepreneurship, SMEs and business climate issues, and SMEs and green growth.’

He also reminisced about the signing of the first MoU with ERIA at the Chateau de la Muette in Paris on the occasion of the 50th Anniversary of Japan’s accession to the OECD.

‘Thanks to this co-operation, and through the OECD Southeast Asia Regional Programme, that then Prime Minister Shinzo Abe and I launched together, we have been strengthening our collaboration with countries in the region in a broad range of policy areas. Our collaboration with ERIA has been integral to our Southeast Asia Regional Programme. By renewing our MoU today, we are taking our relationship to a higher level,’ said Mr Gurria. ‘With the second renewal of this MoU, we will continue to broaden and further build on the breadth of our co-operation, as we put more focus on SMEs, Green Growth, Infrastructure and Connectivity. Discussions are also starting on the next edition of the ASEAN SME Policy Index, and with the help of Japan, the OECD and ERIA are embarking on a project on Connectivity in Southeast Asia.’

Before the signing ceremony, Mr Gurria spoke on a press briefing ‘OECD Secretary-General on Japan after the COVID-19 Pandemic and Its Role in the Indo-Pacific Region’ organised by the Foreign Press Centre Japan. He stated that Japan’s outlook for the next couple of years is positive, with price inflation to remain muted; however, fiscal sustainability in the long term should be observed and maintained.