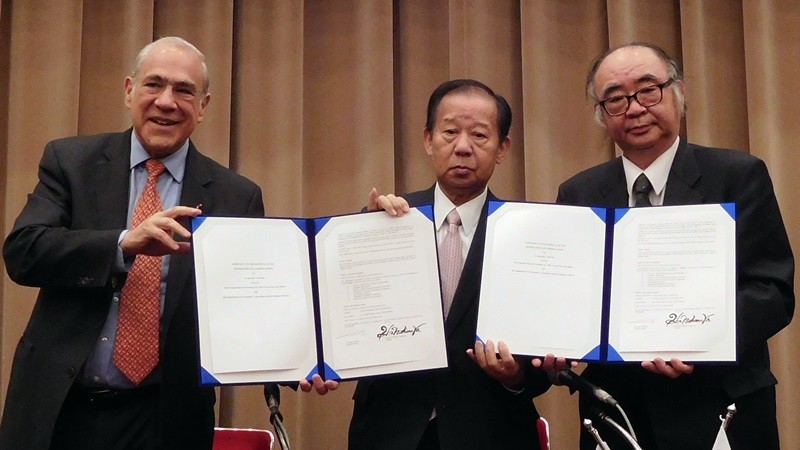 The Economic Research Institute for ASEAN and East Asia (ERIA) and the Organisation for Economic Co-operation and Development (OECD) renewed their Memorandum of Understanding (MOU) in Tokyo, Japan on 14 April 2017 to expand their cooperation.

OECD and ERIA have been working together on research in areas of mutual interest, such as policy on small- and medium-sized enterprises, infrastructures, trade analysis, disaster management, and others.

The signing ceremony between OECD Secretary General Mr Angel Gurria and ERIA President Prof Hidetoshi Nishimura was witnessed by Chairman of the Parliamentary League for OECD/ERIA and Secretary-General of Liberal Democratic Party of Japan H.E. Mr Toshihiro Nikai, who contributed to the creation of ERIA.

Following the signing of the first MOU in Paris, France on 5 May 2014, the two parties have been undertaking joint research projects, in addition to organising symposia and workshops. After reviewing the results of collaborative activities, both organisations have agreed to renew their memorandum for three years as well as expand the areas of cooperation to strengthen mutual research capability and deepen their relationship.

Likening the partnership to a natural extension, Mr Gurria said that he looked forward to continued success in the future. He also mentioned that OECD and ERIA could effectively collaborate in activities in the ASEAN region because each contributed different expertise in the segments they were working on. 'Today is a celebration of continuation and the beginning of the new stage,' he concluded.

Echoing Mr Gurria, Prof Nishimura said, 'The cooperation between ERIA and OECD has been going broader and stronger for three years.' To celebrate the occasion, Prof Nishimura also produced a haiku for H.E. Mr Nikai and Mr Gurria:

H.E. Mr Nikai commended all efforts from all those involved. 'We're just getting started,' he said, adding that he encouraged the attendees to further participate in related activities.

More than 50 people including members of the Parliamentary League for OECD and ERIA, relevant officials from the Mission of Japan to OECD, Ministry of Foreign Affairs, Ministry of Economy, Trade and Industry, and others joined the celebration of the signing ceremony.