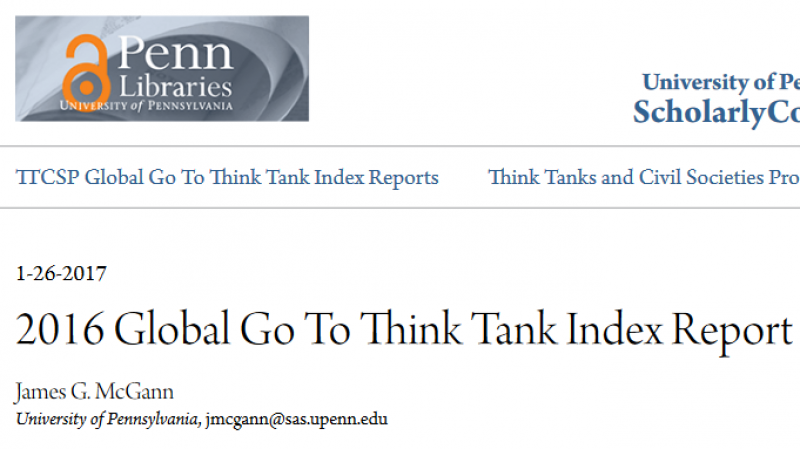 JAKARTA, INDONESIA - The Economic Research Institute for ASEAN and East Asia (ERIA) was recognised as one of the best regional studies centres in the world and improved its ranking in several categories of the 2016 Global Go To Think Tank Index (GGTTI) produced by the University of Pennsylvania's Think Tanks and Civil Societies Program (TTCSP).

ERIA's standing has improved as one of the Top Think Tanks in Southeast Asia and the Pacific, Top International Economic Policy Think Tanks, and Best Think Tank Network. In the last five years, ERIA has managed to continuously improve its rankings and recognition in more categories.

According to the 2016 GGTTI Report, the GGTTI was introduced as a way to 'acknowledge the important contributions and emerging global trends of think tanks worldwide.' Director of TTCSP James McGann mentioned in his introduction to the report that there were 2,543 university faculty and administrators, journalists, policymakers, think tank scholars and executives, and donors that participated in this year's GGTTI, while more than 900 functional area and regional specialists served as expert panellists.

ERIA is an international organisation based in Jakarta. Since its founding in 2008, ERIA, through its research, supports the regional economic integration process among ASEAN member countries. As the leading economic think tank in the region and the Sherpa institution for the East Asia and ASEAN Summit process, ERIA's research and policy recommendations have influenced the policymaking process in the region.