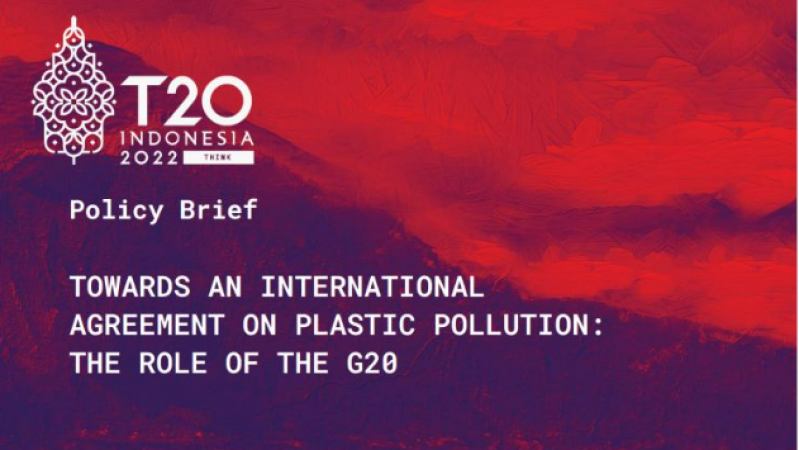 Jakarta, 7 September 2022: The Economic Research Institute for ASEAN and East Asia (ERIA), in collaboration with Berlin-based Ecologic Institute and the University of Indonesia’s Institute for Economics and Social Research (LPEM), co-authored a policy brief on the role of the G20 towards an international agreement on plastic pollution.

This policy brief investigates the gaps in the existing international treaties on plastic pollution and proposes components that need to be considered in a new treaty.

‘These proposals will complement the G20 works on plastic pollution,’ said Michikazu Kojima, Senior Advisor of ERIA and one of the authors of the policy brief.

‘Furthermore, since the G20 summit is held in Indonesia, the focus of this policy brief will not only be relevant to G20 countries but also to Southeast Asia as the biggest contributor of marine plastics,’ added Mr Kojima, who also leads ERIA’s Regional Knowledge Centre for Marine Plastic Debris (RKC-MPD).

Marine plastic pollution has become a critical issue on a global scale, bringing detrimental environmental impacts, including the death of marine species caused by plastic entanglement and ingestion. Southeast Asia is considered the biggest contributor of marine plastics. A recent study shows that the region (except Lao People’s Democratic Republic) disposes into the ocean more than 55 percent of the world’s total output of plastic waste.

Several international treaties covering plastic waste have been enacted. The London Convention, the International Convention for the Prevention of Pollution from Ships (MARPOL), the Convention on the Law of the Sea (UNCLOS) and the Basel Convention are amongst the prominent treaties that address the issue. However, those regulations lack comprehensive discussions on the life cycle of plastics, legally binding agreements, monitoring methods, and quantified targets on plastic pollution. The situation calls for an international treaty that encompasses all components related to plastic pollution must be created.

The Group of 20 (G20) has contributed to the resolution of the plastic pollution issue. In the G20 Hamburg Summit in 2017, the G20 Action Plan on Marine Litter was formulated. In June 2019, the G20 Implementation Framework for Actions on Marine Plastic Litter was established at the G20 Ministerial Meeting on Energy Transitions and Global Environment for Sustainable Growth. Maintaining the momentum, the Osaka Blue Ocean Vision was shared with G20 leaders and to other countries.