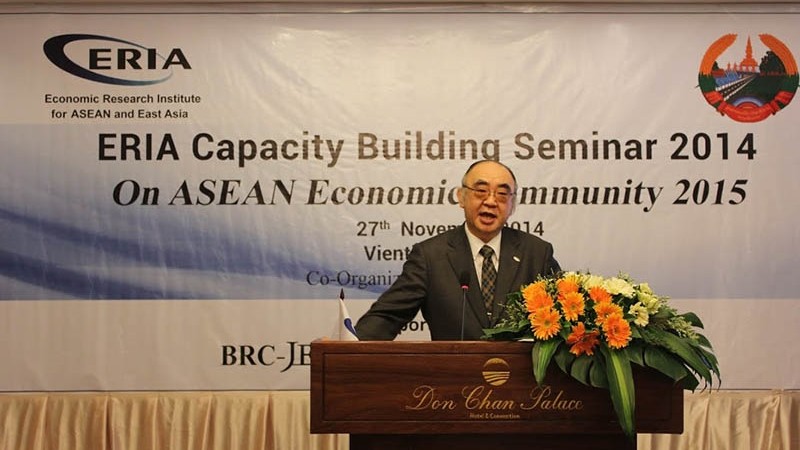 Vientiane-- Lao PDR is upbeat for the future economic integration with the ASEAN Economic Community (AEC) with a scorecard of 85.1 per cent above the ASEAN average of 81.3 percent.

H.E. Mrs. Khemmani Pholsena, Minister of Industry and Commerce of Lao People's Democratic Republic, reiterated that at this implementing level, Lao PDR needs to increase its capacity to undertake further economic reforms and liberalization that would promote further economic growth.

She revealed that Laos has achieved a score of 85.1 percent under the AEC blueprint. "Laos needs to further map out plan for the ASEAN beyond 2015," she added.

In her keynote speech today to open the seminar, H.E. Mrs. Khemmani also requested ERIA to assist her country to prepare for the ASEAN chair, which Laos will resume in 2016.

In response, Prof. Hidetoshi Nishimura, ERIA Executive Director expressed readiness to provide capacity-building for Laotian officials and private sectors. He commended Laos for its continued efforts to increase capacity to maximize benefits from the economic integration. Since its inception, ERIA has been task by the leaders of East Asia Summit to provide capacity building and human resource training form less developed members of ASEAN.

Mr. Xaysomphet Norasingh, Deputy Director General, National Economic Research Institute, Ministry of Planning and Investment, pointed out a series of best practices for Laos PDR to adopt when the country approaches the single market and production base as part of the AEC blueprint. He explained in details new initiatives and programs what Laos must take up to maximize the benefits from economic integration with the region.

Dr. Ponciano S. Intal Jr., ERIA Senior Researcher, focused on the future of ASEAN after the economic integration next year. He outlined various challenges ASEAN will face including the growing income gap between member countries, the need to increase competitiveness and maintain sustainable economic growth within the region.

With prospect of the 630-million ASEAN Community, he said the grouping has been able to attract foreign directed investment. Last year, as a group, ASEAN received US$126 billion while China had US$124 billion, debunking the notion that China has been more favorable than ASEAN for investment.

Since 2008, ERIA has organized capacity building seminars and workshops in Lao PDR to prepare the country for the arrival of ASEAN Community every year, which encompasses economic, political/security and social/cultural pillars. Lao PDR is scheduled to serve as the ASEAN chair in 2016 after Malaysia, which will begin its chair in 2015.

In this connection, ERIA will publish a Lao language edition of "ASEAN Rising" in the near future. The Myanmar language version was published and recently distributed to the Myanmar business sectors at the 25th ASEAN Summit in Nay Pyi Taw.

Assessing the importance of AEC to Laos, Mr. Sysangkhom Khotyotha, Deputy Director General, Trade and Production Promotion Department, Ministry of Industry and Commerce, suggested that Laos should further develop non-resource sector such as garment, textile and handicraft, wood processing and agro-business."Designing special investment incentive packages to attract the Japanese investors in Thailand, especially in car spare-part could one of the approach," he recommended.

The Seminar was attended by over 140 participants from government officials, private sectors and students.