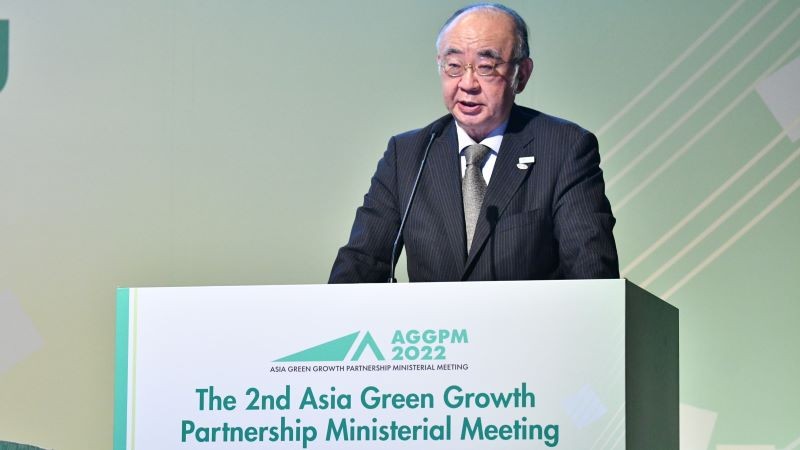 Tokyo, 26 September 2022: The 2nd Asia Green Growth Partnership Ministerial Meeting (AGGPM) 2022 was held in Tokyo, Japan organized by Minister of Economy, Trade, and Industry (METI) Japan, with ministers and representatives of international organisations from Asia, the Middle East, and other countries attending.

The meeting addressed the importance of a balanced energy transition for achieving sustainable economic growth, mitigating climate change, and ensuring energy security in the context of a global energy situation that is undergoing a radical transformation. The meeting discussed the steady progress of numerous public and private sector efforts based on the Asian Energy Transition Initiative (AETI) announced last year, as well as new support measures and projects to expedite it.

Prof Hidetoshi Nishimura, President of ERIA, shared ERIA’s perspective on ASEAN’s carbon neutrality challenges. He cited the institute’s research on a cost-optimal technology deployment scenario to achieve carbon neutrality in the ASEAN region by 2060. Prof Nishimura reported on Cambodia and ERIA’s co-hosting of the 5th East Asia Energy Forum on ASEAN’s Challenges on Carbon Neutrality and Energy Security, which discussed issues relevant to current energy and climate challenges, including the role of natural gas, energy transition pathways, and the financing scheme for the transition.

Transition finance guidelines, technology lists, and perspectives on transition finance, as well as financial activities and policies in line with AETI and Asia Transition Finance (ATF) were discussed in the first session. Through AETI in 2021 and the notion of the Asia Zero Emissions Community, Japan’s government is seeking to contribute to the region's transition to a more sustainable economic model and carbon neutrality. Prof Nishimura of ERIA highlighted decarbonisation pathways to achieve the Glasgow Climate Pact and the Paris Agreement. He reported that ERIA has developed Technology List and Perspectives for Transition Finance in Asia in collaboration with the ATF Study Group. The document, he said, provides a framework for evaluating a potential transition technology as well as factual information on a variety of potential transition technologies.