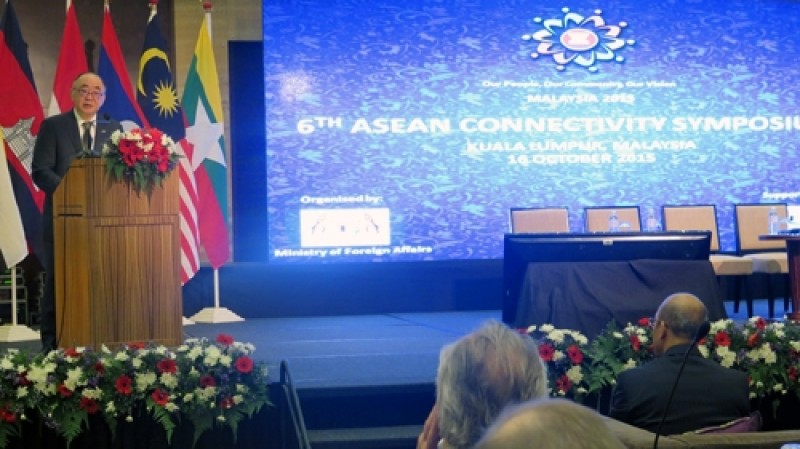 The 6th ASEAN Connectivity Symposium with the theme 'The Connectivity Agenda for an Integrated ASEAN Community' was held on 16 October 2015 in Kuala Lumpur, Malaysia.

It brought together some 140 participants to discuss the materialisation of the Master Plan on ASEAN Connectivity, identify gaps in its implementation, and recommend measures that ASEAN could pursue for a post-2015 connectivity agenda.

The symposium was initiated and organized by the Malaysian Government, and in collaboration with ERIA and the ASEAN Secretariat.

The development of a post-2015 future for ASEAN would necessitate further strengthening of the ASEAN community toward a politically cohesive, economically integrated, socially responsible and truly rules-based, people-oriented, people-centred community.

The conceptual framework for this post-2015 agenda in enhancing physical, institutional, and people-to-people connectivity in ASEAN is laid out in the Comprehensive Asia Development Plan (CADP) 2.0, a flagship project of the Economic Research Institute for ASEAN and East Asia (ERIA).

Prof Nishimura's points were further expounded with finer granularity by ERIA chief economist, Prof Fukunari Kimura, in a presentation that looked at the economic effects of infrastructure on ASEAN countries at different stages of development.

In this new development strategy, Prof Kimura looked at the diverse stages of development between ASEAN countries, and ranked their infrastructure needs in four tiers. Mid- to long-distance connectivity for pre-industrialised underdeveloped economies would still be necessary to help them connect to global value chains (Tier 3), further helping the rural populations of these countries. Countries such as Cambodia and Myanmar meanwhile need medium-grade infrastructure projects to participate in production networks and jump-start industrialisation with increased mechanisation (Tier 2).

What Prof Kimura ranks as Tier 1a are Indonesia, Philippines, and Viet Nam; these are also where CAPD 2.0 sees the need to form industrial agglomerations and accelerate technology transfer with high-grade infrastructure to increase efficiency for quick production networks. More advanced nations such as Malaysia, Singapore, and Thailand need to create innovation hubs to push their economies to developed status. Not only turnpike connectivity is paramount to overcome temporal and spatial restraints but these countries also need to nurture human capital and develop high-level urban amenities necessary to attract global talent.

To this end, CAPD 2.0 will propose 750 infrastructure projects, involving both hard and soft infrastructure within a wide range of sectors from energy to telecommunications.

ERIA leverages on its research capabilities to present a geographical simulation model which can visualise the economic effects on a geographical sense. By running various scenarios and incorporating hard infrastructure elements like the Mekong-India Economic Corridor and soft infrastructure like non-tariff barriers, this simulation can calculate the economic impact up to 2030. Prof Kimura demonstrated how good connectivity will generate a lot of direct and indirect economic effects that will also impact on neighbouring regions like China, India, South Korea, and Japan. He also asserts that the implementation of CAPD 2.0 will change income levels in provincial areas, where regional economies will become more equitable.

The quality of infrastructure projects has to be considered, said Prof Kimura, cautioning countries to take care of a number of aspects, including price competitiveness, built-in mechanisms for financing maintenance of infrastructure, and discipline in fiscal sustainability not only between international development partners but also between public and private partnerships.