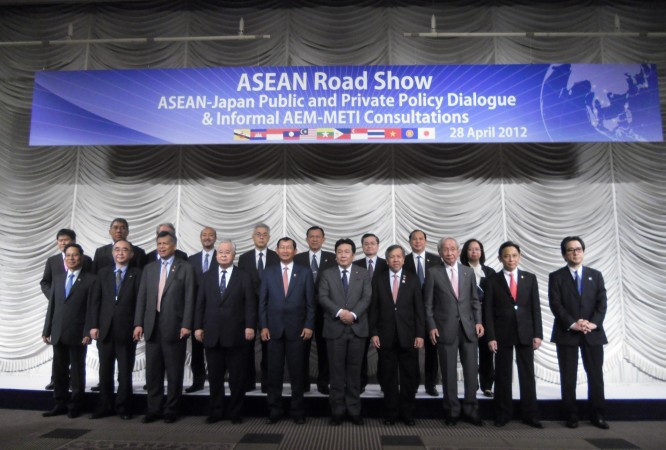 From 25-28 April 2012, the Economic Ministers from ASEAN countries and the Secretary-General of ASEAN will visit Sendai and Tokyo, Japan, to participate in the ASEAN Road Show.

During the Road Show, the Ministers will hold dialogues with politicians, bureaucrats and business leaders, participate in Symposia, tour Japanese companies and factories, and visit the sites affected by the Great East Japan Earthquake.  The ASEAN Road Show aims at building strategic economic partnerships between Japan and ASEAN countries in public and private sectors and enhancing and promoting trade and investment in East Asia region.

In the context of these activities, the Economic Research Institute for ASEAN and East Asia (ERIA) is organizing the following events.

1. ERIA Symposium in Sendai "Towards a Disaster Resilient Economy in East Asia"

2.  FTAs Symposium "Toward Economic Integration in ASEAN and East Asia"

The Sendai Symposium will be led by the Mayor of Sendai City and followed by key note speech from Mr. Hiroshi Okuda, Governing Board Member of ERIA and Former Chairman of Keidanren.  The experience and challenges of recovery from disasters that have occurred in Japan and in other Asian countries will be presented by the Governor of Miyagi prefecture and the Economic Ministers from Thailand and Myanmar.  The research findings of the economic impact and establishment of production and supply chain network needed for the East Asia region will also be introduced by ERIA and discussed in the Symposium.

The FTA Symposium in Tokyo will open with remarks from Prof. Hidetoshi Nishimura, Executive Director of ERIA.  The movement towards establishment of ASEAN Economic Community in 2015, the overview and status of trade and investment in the region, and the prospects of ASEAN regional integration will be presented by the ASEAN Secretariat, ADBI and Denso International Asia, a Japanese company operating in Thailand.  The effectiveness of FTAs, which will incorporate the research results from ERIA and IDE-JETRO will also be discussed by the Economic Ministers and panelists.

ERIA organizes international symposia in Sendai and Tokyo during the "ASEAN Road Show" in Japan.pdf