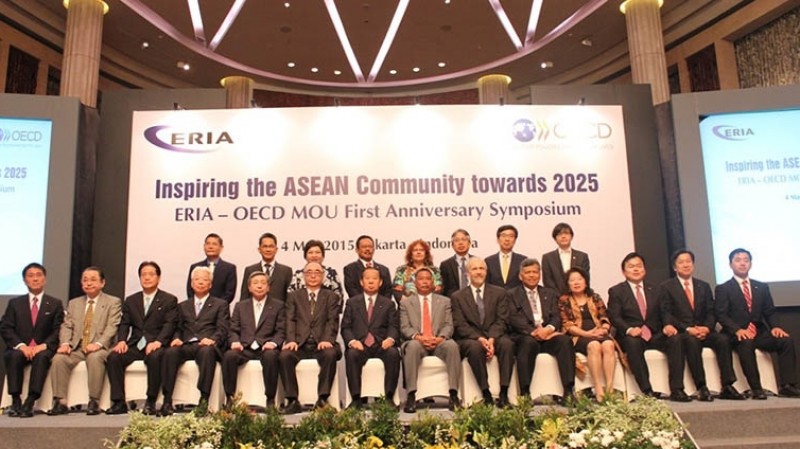 The Economic Research Institute for ASEAN and East Asia (ERIA) and the Organisation for Economic Co-operation and Development (OECD) held a half-day symposium on May 4, 'Inspiring the ASEAN Community Towards 2025', touching upon common endeavours to promote good practices and economic integration in ASEAN and East Asia.

In his video message from Paris, Secretary-General of the OECD, H.E. Angel Gurr�a, said: 'Asia and the ASEAN countries are a growing target and of growing importance in our programmes and our projects. We have just launched a Southeast Asia Programme and precisely in support of that programme is where we are going to accelerate our cooperation with ERIA.'

H.E. William Danvers, Deputy Secretary-General of the OECD, highlighted in his opening remarks, 'The OECD views Southeast Asian engagement as a strategic priority,' noting that, 'Since its foundation in 2008, ERIA has provided research to support the ASEAN economic integration process and structural reforms in ASEAN member countries. With two decades of activity in the region and with the expertise in economic policymaking,' the OECD 'offers the collected and accumulated experience of its 34 member countries as well as many partners that participate in its work across the world.' As the OECD has a broad mandate and develops global standards, OECD instruments could be of interest to partner countries.

Since the past year, the OECD and ERIA have conducted a series of workshops on issues including small and medium enterprises, connectivity, public-private partnership, and trade in value added.

H.E. Toshihiro Nikai, Chairman of the Parliamentary League for ERIA, also expressed strong appreciation for the ERIA-OECD cooperation saying that it has further strengthened the resilience of regional economies, especially amidst many natural disasters.

In this connection, H.E. Mr. Nikai has proposed November 5 as 'World Tsunami Day' to raise awareness of the potential dangers from natural disasters, especially tsunamis. He said that both ERIA and OECD are supportive of the idea.

In a panel discussion on 'East Asian Integration and the Role of ERIA and the OECD', moderated by Dr. Surin Pitsuwan, former Secretary-General of ASEAN, panelists focused on ways and means to promote cooperation. H.E. Mr. Danvers said one way to do this is to bring global standards and perspectives to the region to promote economic integration. Panel discussant Prof. Mari Elka Pangestu, former Indonesian Minister of Trade as well as Tourism and the Creative Economy, said that to move ahead ASEAN would benefit from peer reviews and transparency. It is important, she added, that each member knows what the other is doing, especially on implementing action plans relating to the ASEAN Economic Community.

The second panel, 'Towards an ASEAN Community 2025', moderated by H.E. Ambassador Stephanie Lee of New Zealand, discussed issues related to the economic development in ASEAN post-2015, with a focus on elements that must be added to the ASEAN vision for 2025. Panelists included H.E. Ambassador Dato' Hasnudin Hamzah, the Permanent Representative of Malaysia to ASEAN, and Dr. Alexander C. Chandra, Executive Director of the ASEAN Business Advisory Council.

Wrapping up the symposium, Prof. Hidetoshi Nishimura, Executive Director of ERIA, in his keynote address, 'Towards a Resilient ASEAN and East Asia', provided a panoramic view of economic developments in East Asia, including the rise of ASEAN. Prof. Nishimura reiterated that the successful implementation of the ASEAN Economic Community would also depend on fulfilling the sociocultural pillar of ASEAN as well. 'As we advance towards an ASEAN Community, there must be a stronger sense of an ASEAN conscience--a common ASEAN identity', he concluded.