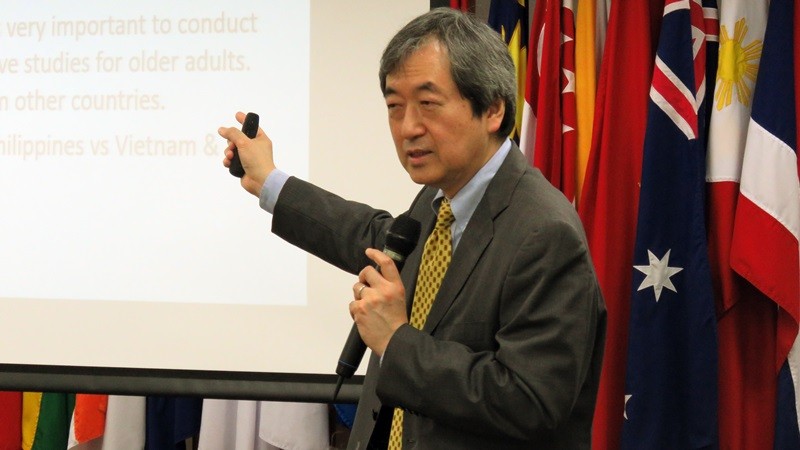 Jakarta, 4 April 2019: The Economic Research Institute for ASEAN and East Asia (ERIA) hosted a special lecture with Nihon University’s Prof Yasuhiko Saito on the ‘Longitudinal Study of Ageing and Health in ASEAN Countries’ on 4 April 2019 at ERIA’s Annex Office in Jakarta.

The lecture is part of an ongoing project examining the wellbeing of the elderly population in Viet Nam and the Philippines. Moreover, the research assesses health expectancy of the elderly, referring to several measures of population health including mortality and morbidity.

In applying their longitudinal study research method, the preliminary findings indicate that a higher GDP in the Philippines does not lead to higher life expectancy, which is at 69.32 years (2015); in contrast, Viet Nam has a higher life expectancy of 76.56 years although it has a lower GDP than the Philippines (2015). Additional findings point to signs of a changing health expectancy that are influenced by factors such as intergeneration support, gait speed, and a history of falling. The final report of the study is due to be released this upcoming June 2019 by ERIA.

While advanced economies are still finding solutions to counter population ageing, developing countries—including those in ASEAN—are facing a bigger problem. Societies in emerging economies are experiencing rapid population ageing even though they have not achieved the status of advanced economic development. This notion thus underlines the importance of early planning ahead of the ageing population boom so as to support policymaking decisions that can aid in overcoming such future hurdles.