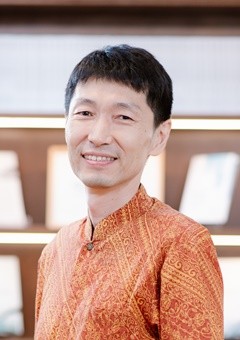 In 2005, he entered PhD course of Graduate School of Biomedical Sciences, Nagasaki University, being interested in demographic transition, health transition and sustainability of development of human beings. During his PhD course, he joined the project to establish Health and Demographic Surveillance System (HDSS) in the rural areas of Western and Coastal Kenya and conducted fieldwork in the target areas of HDSS. His dissertation focuses on the community effect of long-lasting insecticide-treated bed nets (LLINs), which implies that the mass distribution of LLINs can be effective not only for net users but also non users. Nagasaki University conferred a PhD degree on him in 2013.

He was appointed as the resident director of Nairobi Research Station, Japan Society for the Promotion of Science (JSPS), in 2009. During his two years' duty in Nairobi, he hosted several scientific symposia and conferences which supported scientists from various parts of the world to collaborate on the scientific research conducted in Africa. He also contributed to making of MoU between JSPS and the Kenyan counterpart under Kenyan government.

After he resumed working as an ENT surgeon at Nagasaki University Hospital from 2013 to 2015, he transferred to Ministry of Health, Labour and Welfare of Japan (MHLW). He was assigned to a position in Health Insurance Bureau and later under the Director-General for Statistics and Information Policy.