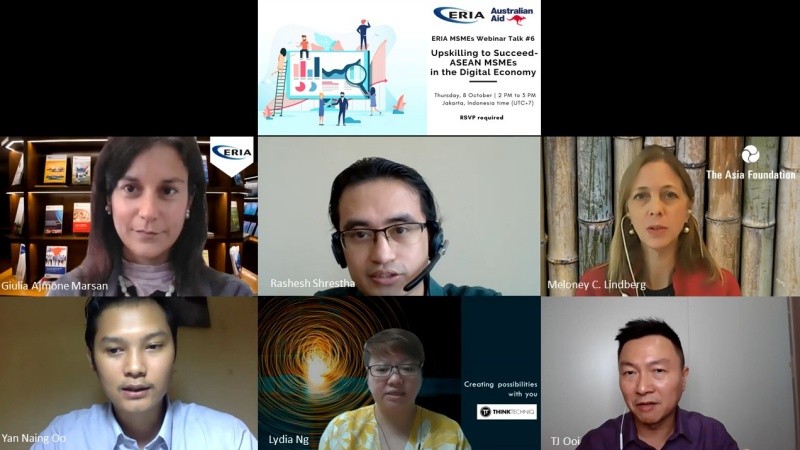 Jakarta, 8 October 2020: ERIA hosted the MSMEs Talk #6 ‘Upskilling to Succeed- ASEAN MSMEs in the Digital Economy’. The webinar kicked off the second part of the MSMEs series organized under ERIA’s Strategy and Partnership Programme, funded by Australia. The webinar was held on 8th October 2020 and attracted more than 210 participants from the Asia-Pacific region.

In her opening remarks, Dr Giulia Ajmone Marsan, ERIA’s Director of Strategy and Partnership, emphasized the rapid acceleration of the digital transformation in ASEAN. She mentioned that the pandemic has accelerated the shift towards digitalisation which requires MSMEs to be equipped with the ability to continuously learn new skills and to collaborate with a broad range of stakeholders. She also highlighted the importance of combining a diverse range of skillsets from cognitive to non-cognitive for MSMEs to thrive and succeed.

The main messages arising from the discussion were:

Mr Yan Naing Oo, CEO & Co-founder, The Door Tech from Myanmar noted the need to optimize digital tools to leverage business entities. He shared his experience on how digital tools have made it possible to expand his business from rural to urban areas in Yangoon, Myanmar. He also highlighted the importance of collaboration among various stakeholders (including MSMEs, larger companies, higher education institutions, NGOs, governmental agencies) to maximise impact.

Ms Lydia Ng, Founder of Thinktechniq in Singapore, discussed the importance for ASEAN entrepreneurs to develop a growth mindset. She gave an example of how she instilled such a mindset in small entrepreneurs by working together with the company employees. She also mentioned the importance of public policy to support business ecosystems, for example by providing monetary stimulus or by developing training programmes for MSMEs.

Ms Meloney C.Lindberg, The Asia Foundation Country Representative in Cambodia, described the recently established initiative ‘Go Digital ASEAN’, a programme implemented by the Asia Foundation and funded by Google.org that provides digital skills training for thousands of MSMEs in ASEAN, many of which are run by women and youth in rural areas. She also added that there is increased awareness amongst regional governments of the need to equip MSMEs with basic digital skills to promote inclusive development.

During the Q&A session, themes that emerged included the importance of: (i)  on-the-job training (ii) urban and rural skills and digital divide across ASEAN (iii) collaboration between MSMEs and other actors such as education institutions.