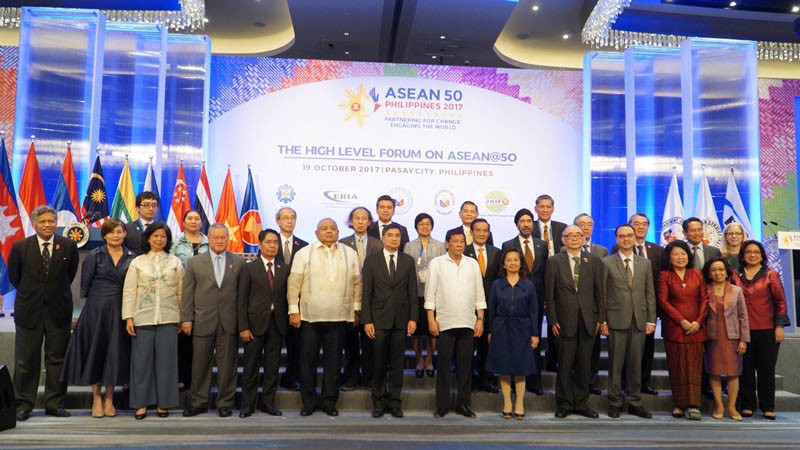 The High Level Forum on [email protected] that was held on 19 October 2017 in Pasay City, Manila marked an important milestone for the Economic Research Institute for ASEAN and East Asia (ERIA), since it was the first high level event involving a Head of State, former Heads of State, Ministers, and former Ministers that ERIA has held since its founding in 2008.

It was co-hosted by the Philippines Department of Foreign Affairs (DFA), ERIA, and the Foreign Service Institute (FSI) of the Philippine Government with the support of Japan-ASEAN Integration Fund (JAIF) and ASEAN Foundation (AF).

'The Forum is also the launching of the special commemorative publication, which has expanded into 5 volumes,' said Prof Hidetoshi Nishimura, President of ERIA, in his opening remarks. Prof Nishimura was referring to the five-volume commemorative publication [email protected]: Retrospectives and Perspectives on the Making, Substance, Significance, and Future of ASEAN. The publication brings the retrospectives and perspectives of key people who have been involved in the making and working of ASEAN, voices from the ASEAN peoples, and the analytical, insights, perspectives and reflections of eminent persons and experts on the evolution, substance and future of ASEAN.

Prof Nishimura added that 'the Forum is also this Forum is a tribute, however small, to the contributions of the Leaders and officials and to the support of other stakeholders.'

The morning panel discussion was conducted with the same theme as the Philippine theme: 'ASEAN: Partnering for Change, Engaging the World' involving senior government officials, an expert, and a youth representative. In the afternoon, a panel discussion of former Leaders of ASEAN Member States moderated by Hon Dr Surin Pitsuwan, the Former Minister of Foreign Affairs of the Kingdom of Thailand and the Former ASEAN Secretary-General discussed the Retrospectives and Perspectives on the Making, Substance, Challenges, and Future of ASEAN. The panellists were former President of the Philippines H.E. Gloria Macapagal-Arroyo and former Prime Minister of Thailand, H.E. Abhisit Vejjajiva, who also contributed their essays in Volume 1 of the commemorative publication.

'Reading their essays in Volume 1 will clearly show the two are very articulate Leaders who offer both deep understanding, insights, and thought provoking voices for an even better ASEAN for the future,' praised Prof Nishimura.

The High Level Forum on [email protected] is the culmination of a series of commemorative events hosted by ERIA in cooperation with partners in several cities in the Philippines to commemorate ASEAN's golden jubilee, focusing on the three pillars of ASEAN: the ASEAN Political Security Community, the ASEAN Economic Community, and the ASEAN Socio-Cultural Community.

The first event was the Public Symposium on Building ASEAN Political Security Community and National Resiliency held in Iloilo City on 18 June 2017, in cooperation with the University of the Philippines in the Visayas (UPV). For the second event, ERIA collaborated with the Philippine Institute for Development Studies (PIDS), the Mindanao Development Authority (MinDA), the ASEAN Society (AS), with the support of the Philippines' Department of Foreign Affairs (DFA)-Philippine Mission to ASEAN, to co-host the Public Symposium on ASEAN Socio-Cultural Community and Nation Building held in Davao City on 24 August 2017. The Public Symposium on Economic Integration and Nation Building was the third event in the series. It was held in Manila on 21 September 2017 by ERIA and PIDS, with the support of DFA-Philippine Mission to ASEAN.