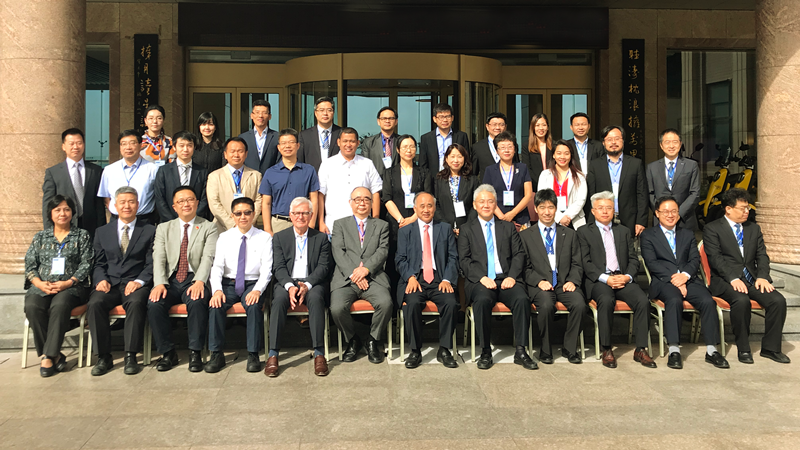 At the opening session, Prof. Wang Lei, Director General, Bureau of International Cooperation of CASS; Mr Zhang Guochun, Deputy Director General of NIIS; and Prof. Zhang Yunling, Academic Member of CASS and Governor of ERIA from China delivered their opening remarks and welcomed all delegates. They explained the importance of this event as a response to the Chinese Prime Minister H.E. Li Keqiang’s proposal in 2014 and expressed their hope that the discussions would be fruitful.

President of ERIA, Prof. Hidetoshi Nishimura, delivered his opening remarks and briefly introduced the key topics of the meeting, including the full utilisation of the existing frameworks or institutions in order to ensure the transparency and predictability. He also discussed the potentials of the digitalisation of the economy, such as Artificial Intelligence (AI), data, and Internet of Things (IoT), including their implications on the East Asia cooperation.

This two-day Symposium had a total of four sessions, and the first day had three sessions. The first session was titled ‘Trade War between China and America: Challenge or Chance for East Asian Regional Cooperation?’ The participants discussed the challenges of the globalisation and global value chains (GVCs) under the current landscape of the uncertain world economy, and new roles of the existing international frameworks in East Asia region (ex. CPTPP, RCEP BRI, as well as several FTAs).

In the second session, the participants discussed ‘Multifaceted Cooperation in Asia-Pacific Region.’ The session picked up the topic of the future vision of Asia Pacific Economic Cooperation (APEC) post-2020, the effects of the Comprehensive and Progressive Trans Pacific Partnership (CPTPP) to each EAS countries, as well as the difference and complementarity of several cooperation frameworks such as Belt and Road Initiative, Master Plan of ASEAN Connectivity, and the Greater Mekong Sub-region.

The last session of the first day was ‘Asia-Pacific V.S. Indo-Pacific: Where to Go?’, in which the participants discussed the history and the role of the concept of Asia-Pacific and Indo-Pacific, the difference of the stance towards Indo-Pacific by the US, Japan, China, and ASEAN, as well as the future possibility of the Indo-Pacific as a cooperation framework.

On the second day, 18 September 2019, the participants freely discussed several critical issues of the East Asia cooperation, particularly the matter of digitalisation and the utilisation of big data to upgrade the global supply chains as a new stage.

Finally, Prof. Zhang Yunling and Prof. Hidetoshi Nishimura delivered their closing remarks and conveyed their appreciation to all participants. They also expressed their enthusiasm on the continued collaboration between ERIA and CASS.