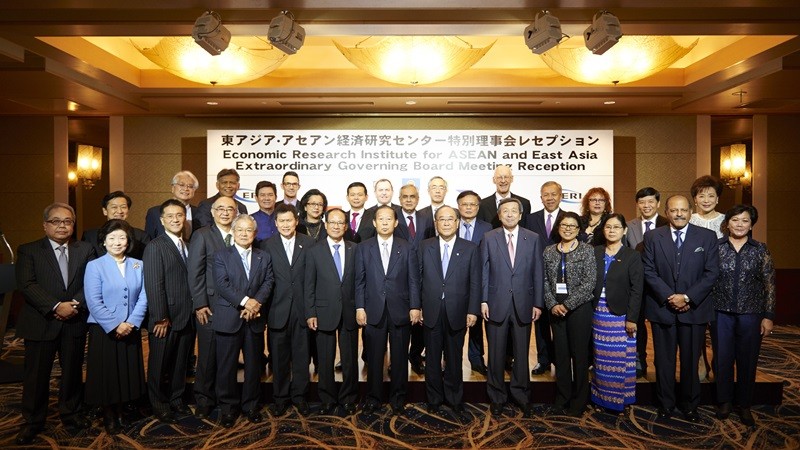 The first Extraordinary ERIA Governing Board Meeting was held in Tokyo on 12 March 2016 to discuss the future work of ERIA.

Under the Chairmanship of Dato Paduka Lim Jock Hoi, the discussion examined ERIA's achievements during its first nine years of existence and the region's expectations regarding ERIA's role in promoting a stable and prosperous ASEAN and East Asia going forward.

The meeting was divided into two sessions: the first presented an overview of ERIA's achievements since its launching in 2007 and the second involved an open discussion of how to increase ERIA's contribution to the economic integration of ASEAN and the East Asia Summit.

During the opening remarks, several speakers referred to the increasing importance of ASEAN and East Asia as a key engine of global growth. H.E. Le Luong Minh highlighted the importance of inclusive economic integration to benefit all citizens. H.E. Motoo Hayashi noted that while East Asia has become a global centre of growth, it is important to recognise the fact that challenges remain and that its future growth depends on innovation and cooperation. H.E. Dr Surin Pitsuwan suggested that East Asia, as the leader for the 'Asian Pacific Century,' needs to improve planning, visioning, and coordination to resolve issues and that ERIA increasingly serves as an important catalyst in making this happen. He noted that 'ERIA's work gives leaders the comfort that their vision is based upon rational research and a strong roadmap.'

The meeting's first session recognised ERIA's many achievements during its first nine years. Professor Fukunari Kimura, Chief Economist, highlighted ERIA's unique role of bridging academics and policymakers. Dr Venkatachalam Anbumozhi, Senior Energy Economist, provided a snapshot of ERIA's accomplishments in energy and disaster management including major studies since 2013 on energy efficiency and conservation, sustainable fossil fuel use, renewables and new energy development, regional cooperation and Integration, and several on disaster risk management. Mr Jeremy Gross, Capacity Building Coordinator, described the evolving capacity building programme funded by the Government of Australia which focuses on participatory activities to build stakeholder's knowledge, skills, and competence. Dr Ponciano Intal, Jr., Senior Economist, presented on ERIA's contribution to the ASEAN Economic Community Blueprint 2025 and the ASEAN Socio-Cultural Blueprint 2025 which leveraged ERIA's robust internal research with external experts' insights. Prof Hidetoshi Nishimura, President of ERIA, described the multiple roles of ERIA as the 'OECD' of East Asia as well as some challenges and opportunities for the Institute moving forward, including shifting from research institute to policy think tank which will include the establishment of a 'Policy Innovation Department'.

The second session of the meeting was an open discussion about the future of ERIA with interventions from member countries. Of particular note were comments by H.E. Motoo Hayashi, who thanked ERIA for its research and policy recommendations. He remarked on the importance of ERIA's contribution to supporting ASEAN integration, East Asia inclusiveness and innovation, and competitiveness as an engine for Asian growth in the future.

The productive discussion was summarised in the Chair's Statement, copied in part here:

The meeting mandated ERIA to respond to emerging demands and future needs in a timely and substantive manner. Towards this end, ERIA will submit a draft reform plan at its next Governing Board Meeting, to be held in Jakarta on 16 June 2016, including the following elements:

I. Strengthening the capacity of its academic research, capacity building programmes, and advocacy activities.

II. Setting up formal bridging mechanisms, such as policy workshops, to enhance interaction between policymakers in the region.

III. Enhancing its own organisational capacity to offer concrete and actionable policy options to address structural issues for the growth and development of the region.

The meeting emphasised the need for ERIA to regularly review its policy focus, giving due consideration to (i) deepening East Asian integration, (ii) realising an inclusive ASEAN Community, and (iii) addressing issues extending beyond the region such as innovation. Japan's leadership and support for ERIA was acknowledged and given sincere appreciation throughout the meeting.

ERIA wishes to receive ongoing support from its member countries to fulfil these tasks and reforms.

The Governing Board members expressed deep condolence for the victims of the East Japan Great Earthquake that took place on 11 March 2011, five years ago.