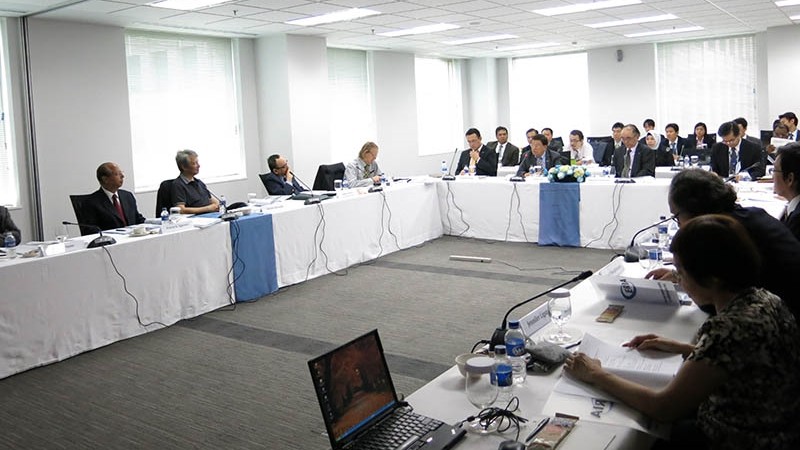 ERIA held its 6th Academic Advisory Council (AAC) Meeting on April 13, 2014 at the ERIA Annex Office in Jakarta, Indonesia with Prof. Dr. Hank Lim Giok-Hay from the Singapore Institute of International Affairs (SIIA) presiding as the Chairperson of the AAC.

Academic Advisory Council is composed of internationally renowned East Asia Summit countries' scholars and experts. The council provides advice on the annual work program plan and review and evaluation of the research outcome.

The meeting was attended by the members of the AAC coming from China, India, Japan, Malaysia, New Zealand and Singapore as well as by high officials and researchers from ERIA.

In his opening remarks, Prof. Hidetoshi Nishimura, Executive Director of ERIA, thanked the members of the AAC for their presence and support and reiterated his firm commitment to work hard and finish his duties in his second term as Executive Director mandated by the Governing Board members of ERIA.

The meeting discussed ERIA's progress in the past year, its current status and its work program and activities for the coming year. The recognition by the East Asia Summit Leaders of ERIA's work in small and medium enterprises, energy, the Myanmar Comprehensive Development Vision (MCDV) and contributions to ASEAN and East Asia activities was highlighted during the meeting.

Enhancement of the Institute's Energy Unit and dissemination function were likewise mentioned. More importantly, efforts by ERIA, through its Executive Director, to reach out across the continent to international think tanks and organizations like the OECD and the IEA in Europe in order to introduce the works of ERIA and establish linkages/networking, were especially cited. Prof. Fukunari Kimura, Chief Economist of ERIA, for his part, presented ERIA's projects for the years 2013 and 2014, after which a lengthy discussion followed wherein the AAC members gave their respective feedbacks and suggestions.

The meeting was concluded by the closing remarks by Prof. Nishimura and Dr. Hank Lim. The latter wished that the AAC members could be more connected with their respective ERIA Research Institute Network (RIN) members to reach an effective and synergized bilateral relation.