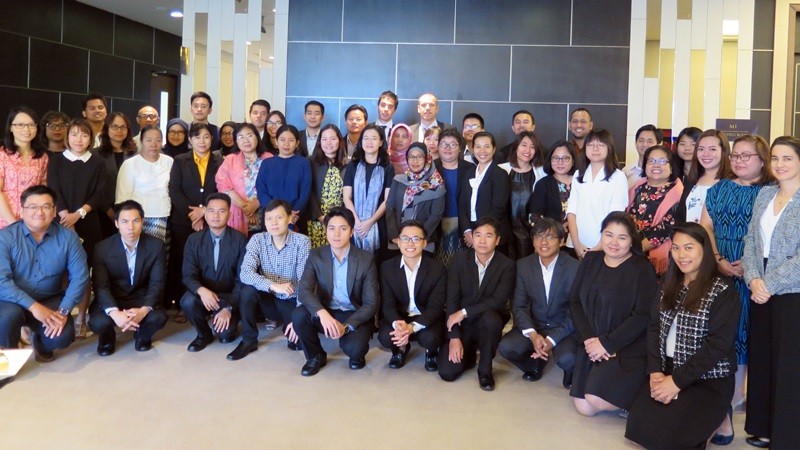 Phuket, 20-22 March 2018: The Economic Research Institute for ASEAN and East Asia (ERIA) and United Nations Conference on Trade and Development (UNCTAD) conducted a workshop to update the Non-Tariff Measures (NTMs) in ASEAN database. The workshop was held in Phuket on 20-22 March 2018 and joined by national consultants and government officials from each of the 10 ASEAN member states (AMS).

The current ERIA-UNCTAD NTM database, which was the result of the first comprehensive ASEAN NTM data collection in 2015, is accessible for public at http://asean.i-tip.org/. The database was created to answer the need for NTM transparency, which is a key in improving export capacities. The latest official database of NTMs by Harmonised System (HS) at the 4-digit level for ASEAN Member States released by the ASEAN Secretariat was only available in 2009.

Since the database was launched, it has received appreciation from the ASEAN Economic Minister who mandated that ERIA and UNCTAD update the database on a regular basis. The Joint Media Statement from the 49th ASEAN Economic Ministerial (AEM) meeting held on 7 September 2017 in Pasay City, Philippines endorsed and mandated the NTMs work done by ERIA-UNCTAD by saying that ‘The Ministers agreed that ASEAN should continue the work with ERIA in, among others, verifying and regularly updating the ASEAN NTMs in the ERIA-UNCTAD NTM database, examining possible policy options for addressing NTMs.’

NTMs in general are defined as policy measures, other than ordinary customs tariffs, which can have an economic effect on international trade. NTMs thus include a wide and diverse array of policies having economic effect on international trade in goods, such as changing the quantities traded, or prices, or both (UNCTAD, 2013).  The Global Trade Alert, a think tank, noted a substantial rise in the number of NTMs between 2008 and 2011. However, the increase in the number of NTMs across the globe is not necessarily a bad sign for the economy. As consumer wealth rises around the world, the demands on governments for health, safety and environmental protection rise as well—which could be one of the reasons behind the increasing number of NTMs.

With tariffs subjected to WTO disciplines, there would be increasing number of NTMs designed to protect domestic firms and industries. This trend is also seen in ASEAN, one of the fastest growing regions in terms of economic growth and trade. The ASEAN Free Trade Area (AFTA) has successfully brought down tariffs from an average of 8.9% in 2000 to 4.5% in 2015. However, statistics showed that NTMs have proliferated from 1,634 measures to 5,975 measures over the same period.

In view of the above, the purpose of the consultancy is to update the existing ASEAN NTM database by collecting and validating NTMs related information in each consultant’s assigned country, by drawing on information from official sources and using the UNCTAD’s NTMs classification and methodological guidelines. This consultancy falls within UNCTAD and ERIA's collaboration which aims to identify, collect and classify NTMs of ASEAN countries. It will contribute in the efforts to improve export capacities by providing trading partners with access to NTMs related information. Lastly, it will assist policy-makers in producing impact assessment analysis of trade related reforms by providing reliable and up-to-date NTMs information.