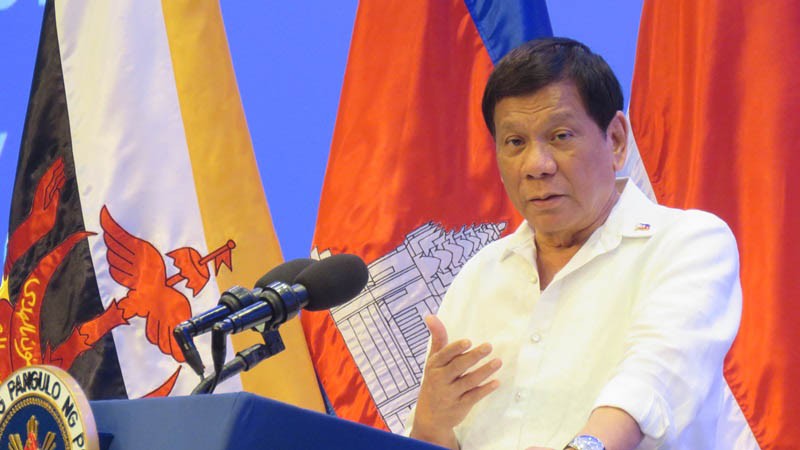 Philippine President Rodrigo Duterte has called on his counterparts in the Association of Southeast Asian Nations (ASEAN) to 'empower' their people by educating them on the significant role ASEAN has played in their individual lives.

Addressing the High Level Forum on ASEAN @50, President Duterte underscored how ASEAN's past successes have directly contributed to the people's well-being, and how the realisation of ASEAN's goals will make their lives better.

'Together, let us cultivate [in] our peoples a sense of ownership - for them to own the ASEAN story as their story, and to see ASEAN's future as their own,' President Duterte remarked in his keynote speech. The forum was organised by the Department of Foreign Affairs (DFA), the Economic Research Institute for ASEAN and East Asia (ERIA), and the Foreign Service Institute (FSI) of the Philippine Government with the support of Japan-ASEAN Integration Fund (JAIF) and ASEAN Foundation (AF) as their contribution to the commemoration of ASEAN's 50th founding anniversary.

It was the final of a series of symposia that tackled ASEAN's past successes and where eminent panelists weighed in on how the organisation, borne out of necessity in a post-World War II environment, could increase its relevance in a significantly different world.

President Duterte noted that some political observers before thought of ASEAN 'as an experiment bound to fail' but, half a century later, it instead became 'one of the world's most successful regional communities.'

He did not directly attribute ASEAN's success to any one factor or group of factors but took exception to how ASEAN's core principles of centrality and neutrality has helped the organisation promote 'common interests through mutual cooperation and constructive engagements with Dialogue Partners.'

'ASEAN's crucial role as the fulcrum that balances stability and security in the region is a testament [to] its success in the past 50 years,' President Duterte said. 'ASEAN was successful not just in bringing together a regional community, but also in shaping the relationships among major players in the [Asia] Pacific region.'

Prior to his speech, eminent ASEAN leaders such as former Philippine President Gloria Macapagal-Arroyoand former Thai Prime Minister Abhisit Vejjajjiva detailed to the audience how the evolution of the ASEAN community has set the course for the grouping's continuing story as a family of nations. It was in that vein that President Duterte recalled that the Philippines, as it accepted the chairmanship of ASEAN from Laos, pledged to uphold shared values and aspirations of regional peace and stability. It is this regional peace and stability that has allowed ASEAN's 10 member states to prosper and develop economically that, as a consequence, brought financial well-being to its citizens as well.

President Duterte reiterated the Philippines' resolve to uphold shared ASEAN objectives such as regional economic integration and having an adequate response to traditional and non-traditional security threats.

The Philippines would also like to see 'substantial progress' in the establishment of the Regional Comprehensive Economic Partnership, which would give ASEAN economies deeper access to those of its partner nations, even as Manila passes on the chairmanship of ASEAN in 2018 to Singapore.

'It is our shared hope [that] our gains will become part of our continuing commitment to ASEAN and the principles for which it stands for,' President Duterte said.

President Duterte's speech was the highlight of the High Level Forum on ASEAN @50, the last installment in a series of symposia organised by ERIA. The series, held in major Philippine cities throughout the year, focused on the three ASEAN communities - the ASEAN Political-Security Community, the ASEAN Economic Community, and the ASEAN Socio-Cultural Community.

The symposia were attended by over a thousand members of the diplomatic community, the academe, civil society, as well as Philippine and international media. It is part of ERIA's contribution to the commemorative events celebrating the 50th founding anniversary of ASEAN.