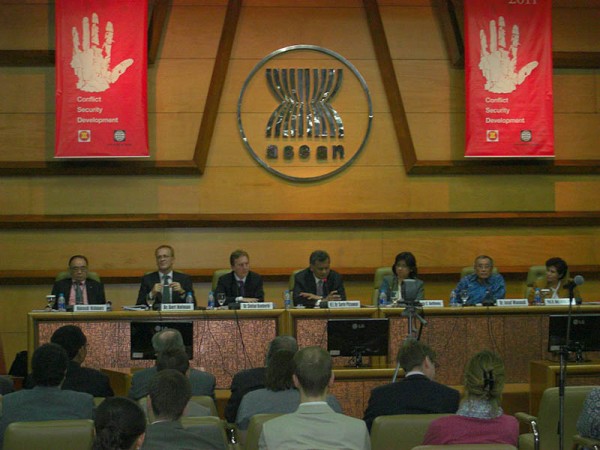 ASEAN (The Association of Southeast Asian Nations) and the World Bank invited Mr. Hidetoshi Nishimura, Executive Director of ERIA, to participate in an expert panel discussion as part of the East Asia Regional Launch of the World Development Report 2011: Conflict, Security, and Development. The event took place in ASEAN Secretariat on 4 May 2011 in Jakarta, Indonesia, ahead of the 18th ASEAN Summit.

The World Development Report 2011: Conflict, Security and Development shows how organized violence in the 21st century is provoked by a range of domestic and international stresses, including youth unemployment, income shocks, tensions among ethnic, religious or social groups, and organized crime and trafficking networks. In citizen surveys carried out for the report, unemployment is cited as the most important factor into gangs and rebel movements.

In this context, Mr. Nishimura indicated that the importance of the role of production networks in ASEAN and East Asia. Building and expansion of production networks naturally generate the effect of economic integration and narrowing development gaps and it simultaneously creates job opportunity. A lively discussion on the implications of the report's findings and recommendations for the region was conducted.