CSIS and ERIA Hold a Roundtable Discussion on Trade, RCEP, and Innovation 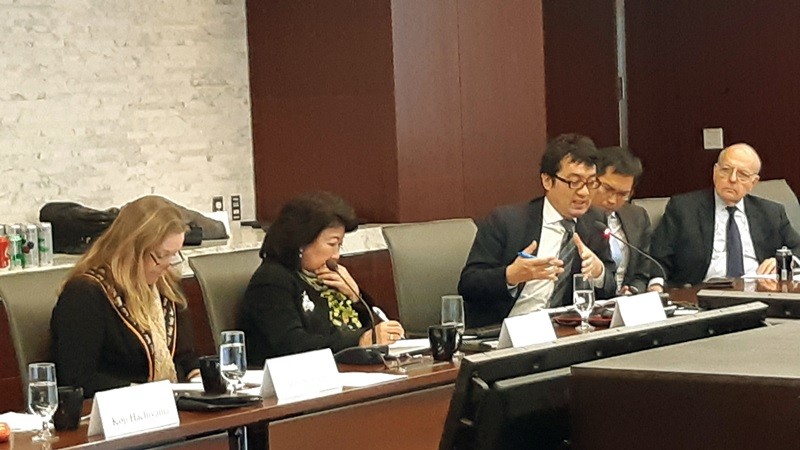 Washington, 18 November 2019: The Center for Strategic and International Studies (CSIS) Southeast Asia Program in Washington, D.C. recently hosted a second roundtable discussion with the Economic Research Institute for ASEAN and East Asia (ERIA) on 18 November 2019. The first roundtable discussion between CSIS and ERIA on ERIA’s publication, ASEAN Vision 2040, was held on 24 September 2019.

As Asia forges ahead with its development and economic prominence, ASEAN in particular, has a unique role in moving the wheels of regional development and initiating a leadership role during a time of unprecedented changes. To highlight ASEAN’s important role, the CSIS – ERIA roundtable discussion included two speakers from ERIA covering the theme of Innovation and ASEAN Centrality. The selected themes represent key priorities required to achieve a strong and unified ASEAN.

ERIA Economist, Dr Masahito Ambashi, was first to share his presentation on Technology, Innovation, and Globalization for ASEAN. In his presentation, Dr Ambashi explained his assessment of how product and service innovation by private enterprises and new start-ups are at the core of ASEAN’s future growth. Currently, the region has found success in ‘imitative innovation’ leading to more advanced innovative capacities, however, Dr Ambashi believes that ASEAN will need to strive for more innovation than imitation as it becomes increasingly technologically adept. With a young demography and a promising tech industry, ASEAN has the potential to become an innovation hub with far-reaching influence.

Prof Mari Elka Pangestu, ERIA Special Envoy of the President on Special Issues, gave a presentation on ASEAN Centrality and Collective Leadership in face of Trade Uncertainties. The emergence of a ‘new normal’ characterised by demographic and development challenges, a global economic slowdown, and the departure of advanced economies’ leadership in the region has given ASEAN an opportunity to take charge. Furthermore, the US-China trade dispute offers members of the ASEAN and Pacific community the possibility to carry out leadership roles in regional and multilateral institutions. In terms of the economy, Prof Pangestu trusts that fostering technological innovation and reinforcing liberal trade norms can stimulate ASEAN’s economic growth.

Realising these goals comes with its set of challenges particularly since 2016 when the United States has been increasingly understood to ‘Pivot Away from Asia.’ The burden of bilateral trade tensions resulting from trade deficits between ASEAN and the United States has further strained ties. As such, the pressing question raised by Prof Pangestu in light of the current situation was ‘Can business-to-business engagement continue despite increasing ASEAN-US tension?’

Unlike growing protectionist sentiment in global trade, ASEAN has solidified its stance by supporting open trade norms and multilateralism. The Regional Comprehensive Economic Partnership (RCEP) is a prime example of an ASEAN-led initiative combining aspects of openness to trade and investment as well as the possibility to create reforms beyond regional borders. RCEP negotiations have so far included all ASEAN Member-States, China, Japan, South Korea, Australia, and New Zealand. Despite India’s departure from the agreement, the RCEP still accounts for 30% of the world’s GDP, trade, and population. For Prof Pangestu, the RCEP is not an end goal, it is merely a beginning.

Through events such as the CSIS – ERIA roundtable discussions, it is hoped that US leaders and policy-makers gain greater awareness about ASEAN’s future and growing significance amidst ground-breaking shifts and massive disruptions.