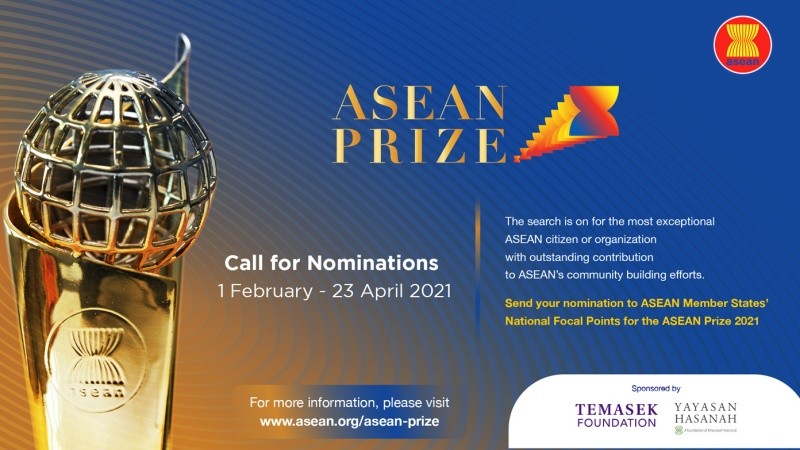 The Community Affairs Director of ASEAN Secretariat Lee Yoong Yoong, who oversees the ASEAN Prize administration, said: 'After a challenging 2020, ASEAN Prize 2021 is an opportunity to celebrate the indomitable spirit of ASEAN citizens in helping to improve our lives as a community. We hope to identify and recognise another ASEAN champion to inspire the region as we journey together towards post-pandemic recovery.'

According to the rules, the nomination should be submitted by at least one reference. Submissions must include the summary or highlights of the nominee’s achievements and relevant supporting documents since the launch of the ASEAN Community on 31 December 2015.

The Judging Committee, chaired by the Secretary-General of ASEAN, Dato Lim Jock Hoi, and his predecessors, will review the nominations and select the ASEAN Prize 2021 Recipient, who will receive the ASEAN Prize trophy to be presented at the 54th ASEAN Ministerial Meeting in Bandar Seri Begawan, Brunei Darussalam, and a US$20,000 cash prize. The ASEAN Prize is supported by Temasek Foundation, Singapore, and Yayasan Hasanah of Malaysia.

Since its establishment, ASEAN Prize has been awarded to three recipients. In 2018, Erlinda Koe from the Philippines was the Prize’s inaugural recipient in recognition of her efforts to build an inclusive ASEAN Community by raising awareness on autism. The following year, Dr. Jemilah Mahmood, an ardent humanitarian leader from Malaysia, received the Prize for her contributions in championing humanitarian responses across the region and the world. Last year, the ASEAN Studies Centre from the ISEAS-Yusof Ishak Institute of Singapore was awarded the Prize for their long-standing work in promoting regional integration in ASEAN.

Please submit nominations to your respective National Focal Point. The ASEAN Prize 2021 nomination form can be downloaded at https://asean.org/asean-prize/.