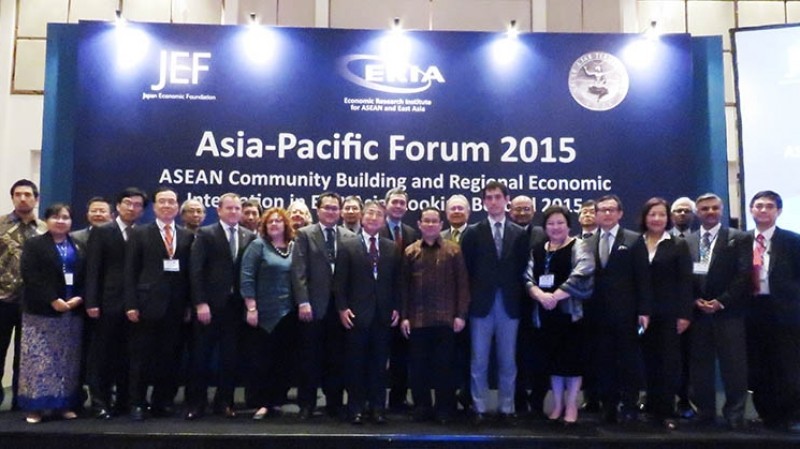 The year 2015 is a noteworthy one as the ASEAN Economic Community (AEC) has been formally declared. With this backdrop, the 14th Asia-Pacific Forum (APF) titled "ASEAN Community Building and Regional Economic Integration in East Asia: Looking Beyond 2015" was held to assess the challenges facing Asian economic integration.

APF was hosted by the Economic Research Institute for ASEAN and East Asia (ERIA), Japan Economic Foundation (JEF), and the Center for Strategic and International Studies (CSIS) on 26 November 2015, in Jakarta, Indonesia.

H. E. Rizal Affandi Lukman, Indonesia's Deputy Minister for International Economic Cooperation, said in his keynote address that "AEC is only the beginning and remains a work in progress." He added that the post-2015 AEC vision will aim for a politically cohesive, economically integrated, socially responsible, and a truly people-oriented, people-centered and rules-based ASEAN.

In his opening remarks, Izuru Kobayashi, COO of ERIA, said that the creation of the AEC was a great achievement of the 10 member countries of ASEAN. He emphasized that ERIA is determined to support ASEAN economic integration.

Mr. Kazumasa Kusaka, Chairman of JEF, underscored how the deepening of integration impacts the economies, societies, and politics of each country. Overcoming these issues will be a big challenge. The aim should be to identify and remove barriers that constrain the growth. However, there may be instances where policy measures and institutions are outdated. In such cases, the prescription is to push for structural reform using trade and investment liberalization as leverage.

Dr. Yose Rizal Damuri, Head of the Department of Economics at CSIS, underscored the importance of ASEAN centrality in the economic integration in East Asia and he expected that there will be more such forums to discuss regional integration issues.

In Support of ASEAN

The Asia-Pacific Forum 2015 aimed to support ASEAN's community-building efforts focusing on the economic integration process and its future after 2015.

In Panel Session 1, A Decade of East Asia Summit and Economic Regionalism: How can we pursue our growth strategy and achieve structural reform, the panelists discussed domestic institutional reform and capacity building and other "behind the border" measures to enhance human resources. It was also mentioned that the quality of infrastructure is key to promoting deepening regional integration in the Asia-Pacific region. To realize security and social sustainability, the most important goal is to achieve economic growth by structural reform. "Inclusiveness" of the growth was noted as a key concept for future discussions.

In Panel Session 2, ASEAN Economic Community as Driver of Regional Integration in East Asia: Challenges and Opportunities, the discussion focused on how much remains to be done to strengthen AEC integration, such as reducing NTBs, liberalizing the service sector, and facilitating the free flow of goods and skilled labor. The fundamental challenge for the ASEAN Community to be the driver of the East Asia integration is for the people of ASEAN to embrace the AEC and its Blueprint 2016-2025.

In Panel Session 3, Regional Economic Integration: Can the New Economic Institutions like RCEP, TPP and AIIB Deepen the East Asian Economic Integration, the panelists brought forward the role of TPP, AIIB, OBOR, and other regional initiatives and their impact on the growth of the EAS region. The panel concluded that the emergent institutions were beneficial but will require greater strategic planning and implementation. The initiatives will also have to work for including the new members into their processes.

The discussions and recommendations that came out of the Asia-Pacific Forum are expected to have a positive influence on the Asian region's policy environment. The Forum attracted some 150 participants from government, academia, and the private sector.

A more detail summary report of the Forum will be available at www.eria.org and www.jef.or.jp by the end of December.