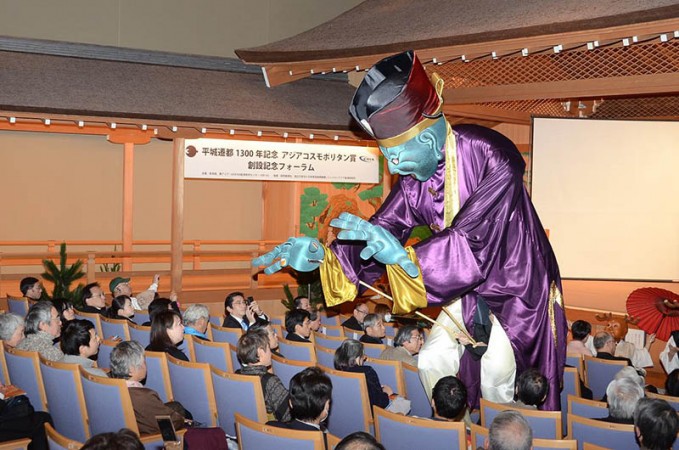 The Economic Research Institute for ASEAN and East Asia (ERIA) and Nara Prefecture of Japan will be establishing an international award called "Asia Cosmopolitan Awards" in February 2012.

On this occasion they will also organize "Asia Cosmopolitan Awards Commemorative Forum" entitled "Moving Towards Economic and Cultural Integration in East Asia" in Nara, Japan.  The awards will be established by commemoration of the 1300-year anniversary in 2010 of Heijo-kyo (ancient capital of Japan located in preset-day Nara) as the last destination of the ancient Silk Road and one of the first cosmopolitan cities in East Asia.  It will be awarded to individuals or organizations who have made substantial and significant contribution to the development and enrichment of East Asian Community by means of cultural and economic integration, the narrowing of developmental gaps, and establish sustainable growth of society in the region.  The award is categorized in three prizes: Grand Prize, Economic and Social Science Prize, and Cultural Prize.  The winners of the prizes will be selected once every two years.  The first winners will be presented the award at a ceremony which will be held in Nara, Japan, by the end of 2012.

The Forum will be held at Nogaku Hall, Shinkokaido in Nara, Japan on Feb. 3, 2012. It will be led by the speeches of H.R.H. Samdech Norodom Sirivudh, Founder and Chairman of the Board of Directors, Cambodian Institute for Cooperation and Peace (CICP) and Dr. Takashi Shiraishi, President of Institute of Developing Economies (IDE), Japan External Trade Organization (JETRO), who will introduce the expectations and roles of the new international Awards. Mr. Shogo Arai, Governor of Nara Prefecture will give the opening remarks. The Forum will be extended by the keynote speeches of H.E. Dr. Surin Pitsuwan, Secretary General of ASEAN and Prof. Fukunari Kimura from Keio University and Chief Economist of ERIA. They will address the Forum on the theme of "Future of Asia" and "The Asian Economy and Connectivity", respectively. Prof. Robert Campbell, University of Tokyo will participate in the Forum as a guest speaker and will deliver a special speech on "Way of Cosmopolitan". A panel discussion on "Roles and Expectations of Cosmopolitan" will be held among Professors Robert Campbell, Hanae, Essayist and Mr. Shogo Arai will also be included in the Forum. Mr. Hidetoshi Nishimura, Executive Director of ERIA will make closing remarks at the end of the Forum. Around 450 participants are expected to attend the Forum.

Awarded to an individual and/or organization for most distinguished achievements in economic, social science, or cultural fields.

Awarded to an individual and/or organization contributing to the betterment of Asia in the economic or social science fields through eminent achievements in scholarly research, business innovation, industrial technology, smart consumption activities, security/safety, social security, politics, philosophy, or other general social sciences.

Awarded to an individual and/or organization contributing to the betterment of Asia in the cultural fields through eminent achievements in the arts, literature, content, cultural academic research or other cultural fields.

Prizes shall be awarded regardless of the nation of origin of any individual and/or organization.