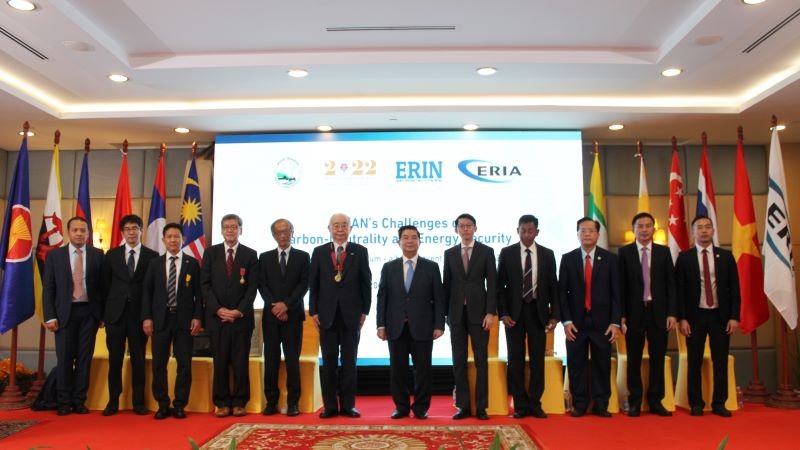 Phnom Penh, 12 September 2022: The emerging energy topics of decarbonisation and carbon mitigation efforts have been challenges for the ASEAN region, and global concerns regarding climate change put more pressure on the region to contribute to the low carbon transition. The necessity of carbon neutrality to accelerate Paris Agreement goals was highlighted at the Conference of Parties (COP26) in Glasgow 2021 where participating countries announced the goal of carbon neutral targets by 2050 depending on international support. However, the Russia-Ukraine war has brought an imbalance of demand-supply of fossil fuel globally, affecting the significant increase of global energy costs which interferes with global commodity prices and trade. The energy supply shortage also impedes global energy security.

To address these issues, the Fifth East Asia Energy Forum (EAEF) was held in Phnom Penh, Cambodia with the theme ‘ASEAN’s Challenges on Carbon-Neutrality and Energy Security’. The results of the day’s discussions are captured in the ‘Phnom Penh Reflections’.

The forum was privileged to have a welcoming remark by H.E. Suy Sem, Minister of Mines and Energy, Cambodia. His Excellency highlighted the global energy issues which have been exacerbated by the Russia-Ukraine war. ‘The world needs to develop a smooth energy transition while minimising the use of fossil fuels, therefore we must commit to continuing fight against climate change by strengthening cooperation and collaboration to find solutions for both climate and energy development of the country according to the resources, responsibilities and capability of each country,’ he said.

His Excellency pointed out that Cambodia takes this opportunity to contribute to achieving carbon neutrality by preparing the Power Development Plan for 2022-2040. ‘[…]the key to carbon neutrality is to mobilise huge investment and the facilitation of investment climate for clean energy and renewable energy projects, as well as financing infrastructure projects to assimilate existing coal-fired and gas-fired power generation to using clean technologies, carbon capture, utilisation and storage and hydrogen technologies, as well as upgrades or add-ons equipment or technology for all aspects of power generation, from upstream to downstream and into the entire energy system,’ said H.E. Suy Sem.

For his opening remarks, H.E. Dato Lim Jock Hoi, Secretary-General of ASEAN, pointed out the continuous efforts to find solutions for decarbonisation and climate mitigation efforts within the region through this forum. ‘ASEAN has been pressing to contribute to low carbon and sustainable future. Within the ASEAN economic pillar, consolidation intervention has been put in place to accelerate sustainability initiative, including on-going effort on Circular Economy Framework and on-going preparation on carbon neutral strategy for ASEAN,’ he said. His Excellency also stated that the support of the finance and banking sector for the carbon neutrality strategy will expedite the realisation of energy security, affordability, and accessibility. The outcomes of this forum will be reported to the next EAS Energy Ministers Meeting.

Several high-level officials from energy ministries from ASEAN countries, Japan and the United States participated in this forum to convey their commitments to be part of international cooperation for achieving carbon neutrality targets within the region. Global energy experts, policymakers, academia, public, and private institutions such as ASEAN Centre for Energy (ACE), Institute of Energy Economics, Japan (IEEJ), International Energy Agency (IEA), Organisation for Economic Co-operation and Development (OECD), Kpler, and MUFG Bank also took part in the forum’s panel discussion and deliberate over the Russia-Ukraine War impacts on global energy security, actions towards affordable energy transition as well as securing investment towards carbon-neutrality efforts.

As a closing remark, the President of ERIA, Prof Hidetoshi Nishimura emphasised several points on the importance of securing natural gas supply, including its investment within the region. Furthermore, multiple pathways toward carbon neutrality should be in place for achieving ASEAN decarbonisation and carbon neutrality targets by 2060. ‘Stakeholders including the governments, financial institutions, and the private sector in the ASEAN region will need to make the actions clear on the technology transition while simultaneously promoting renewables and clean technologies. In addition, ASEAN countries should raise their voices in the international debate on green finance so that diverse national/regional circumstances could appropriately be taken into consideration,’ said Prof Nishimura.