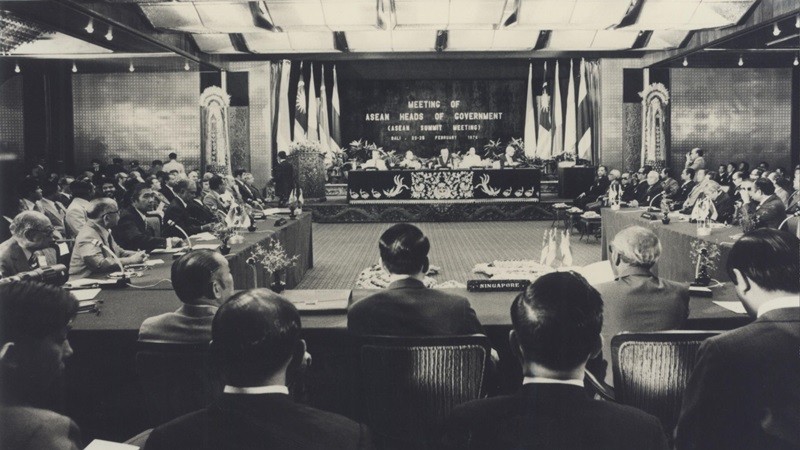 The Association of Southeast Asian Nations (ASEAN) has played an essential role in maintaining peace and building prosperity in the region in its 50 years of existence. Its continued success over the next fifty years depends on its ability to foster an ASEAN community and identity in which citizens of the region truly feel engaged.

Established in 1967 against the backdrop of tensions between its five founder members, and the Cold War, these nations decided to put aside their differences and create an association to promote regional peace and security. Defying those who predicted that ASEAN was bound to fail - given the hostile circumstances into which it was born - the grouping has instead created the stability and peace its members needed in order to develop and prosper.

ASEAN's GDP now stands at approximately US$2.5 trillion, ranking the expanded grouping as the world's sixth largest economy and fourth largest global trading power. ASEAN nations have built regional production networks across many sectors, have boosted their competitiveness in global markets and have significantly reduced poverty. But while the numbers look good on paper, there are still many difficult internal and external issues to tackle if ASEAN is to continue to thrive in the years to come. External challenges pose internal pressures. The current retreat of advanced nations from globalisation into protectionism is destabilising the global economic footing that has underpinned steady growth in ASEAN for three decades. For example, the US has threatened to withdraw from its trade deal with Korea; if this happens, ASEAN will be adversely affected as the inputs for many Korean exports come from within the grouping. This uncertainty hanging over global trade means ASEAN must find a new engine with which to maintain its robust growth. Economically, ASEAN member states must develop their own markets to overcome this backlash against globalization and must therefore intensify efforts to integrate internally. ASEAN must be more ambitious in pushing internal reform and creating its own identity. Fixing domestic problems will, of course, aid in integration with more developed economies outside of ASEAN.

The next step for ASEAN integration lies in the need to build a sense of community and identity among ASEAN citizens; striking successful trade deals, while crucial, is not enough. Building this identity will be challenging and requires serious political will, but most importantly it must be driven by all citizens, not only bureaucrats, politicians, or researchers.

Research by ERIA shows that awareness of ASEAN is limited only to ASEAN's economic pillar among the general population. This must change if people are to feel a sense of regional community, and people must also see the clear benefits that this ASEAN community brings to their lives. Broadly, there are three tasks ASEAN must take on. First, ASEAN must produce tangible benefits that people can see. For example, the standardisation of ASEAN vehicle number plates was an idea that came out of a recent high level forum on [email protected] organised by ERIA and partners in Manila. Allowing passenger vehicles to roam freely across borders is a simple idea, but a tangible one that would ease cross-border movement for citizens, and could create a real sense of community.

More ambitiously, improving the current rules on freedom of movement for workers and making it easier for people to find jobs in other ASEAN nations would give a deeper sense of the benefits brought about by ASEAN membership. The current regulations are restrictive and only apply to eight professions compared, for example, to the 63 covered by the North American Free Trade Agreement.

Second, it is time for ASEAN to have its own distinct identity as a region. This could be acquired by collaborating on an ASEAN-branded product that makes use of the complementary skills of each nation. If ASEAN were to build its own car, for example, Singaporean firms could tackle the design, marketing, and branding, while Indonesian firms would provide parts and Vietnam might tackle the electronic components of radio and navigation system.

Third, ASEAN nations should strive to increase citizen participation in ASEAN forums and agendas in order to build public trust in its systems and processes. The people should direct ASEAN's agenda and its institutions must therefore be actively engaged with civil society, youth, and other relevant stakeholders.

By engaging with more stakeholders, transparency within ASEAN would be improved, while engaging with young people is also a way to promote ASEAN to future leaders. Discussions with civil society and the broader public can give officials insights into areas of real concern to the people they represent.

Until now, an ASEAN identity has come second to the single nationality mindset. It is now time for us to stand up as a region. It is time for us to realise our potential. It is our time to partner for change, engage our citizens and engage the world.