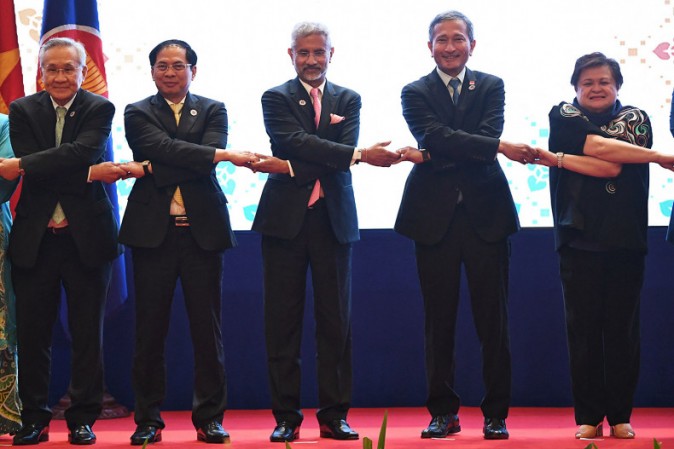 By Mr Kavi Chongkittavorn, Senior Communications Advisor: First of all, the ministers have taken the recent execution of four prodemocracy activists very seriously, so much so that some Asean members would like to condemn Myanmar outright or even suspend the regime — meaning ending all communications with it. They felt the bloc’s reputation has been ruined as the executions were carried out just days ahead of the annual meeting despite an  appeal by the Asean chair.

From the Asean chair’s perspective, the death sentences were “highly reprehensible” as they created a serious setback and demonstrated a gross lack of will to support the chair’s efforts. In private, the Asean leaders expressed their “deepest condolences” to the families of all the victims.

In Phnom Penh, the senior officials had to work late into the night to iron out acceptable terms to describe Myanmar’s bloody behaviour. This delayed by one day the release of the 55th joint communique which usually comes out at the end of their meeting. At the ministerial meeting, the Asean leaders expressed hope there would be no repeat of such incidents.

Secondly, the 29-page communique made it clear that Myanmar has not done enough to follow through with the 5PC. “We were deeply disappointed by the limited progress in and local commitment of the Nay Pyi Taw authorities to the timely and complete implementation of  the 5PC.”

The wording reflected the comments made by the Asean chair, Prime Minister Hun Sen, who has been reaching out to the regime and trying to create an atmosphere conducive to having the Myanmar leader, Senior General Min Aung Hlaing, return to the Asean circuit. Judging from the annual meeting, the Cambodian chair has not given up on its efforts to get the SAC back into the Asean family despite being deeply disappointed.

Thirdly, depending on the progress made or the lack of it, in the next 95 days before the Asean-related summits take place on Nov 10-11, the bloc’s leaders might be forced to come up with new decisions regarding the status of Myanmar, according to the communique. This point has been extensively discussed as it represents a red line for Asean to determine the future status of Myanmar. Obviously, progress in implementing the 5PC must be sufficient to warrant the return of Myanmar to the summits.

From now on, the next Asean chair, Indonesia, and firebrand Malaysia will carry extra weight in assessing the progress made by the SAC. At the moment, these two key Asean members have made it clear that they want the bloc to elevate the status of the National Unity Government (NUG).

Malaysia has become the first Asean member to break ranks and meet up with representatives of NUG. If Myanmar continues this bloody trajectory, the incoming chair will not stand idly by and could allow the NUG to open an office in Jakarta to ramp up pressure on the junta.

The Philippines, which has been highly critical of the SAC, could be the next Asean member to follow Malaysia’s approach.

On the other hand, some Asean members, especially those with a common border with Myanmar, are still adamant that channels of communications must remain open with the SAC if there is a chance the current crisis can be resolved.

In this case, the so-called CLVT (Cambodia, Laos, Vietnam, Thailand) are on the same page in keeping all doors open. India, China, and Bangladesh, which share borders with Myanmar, also share this approach.

The joint communique is also succinct in stressing the urgent need for the regime to implement the 5PC. For the past 16 months, the SAC has argued that the situation within remains unstable and intense fighting continues between the Tatmadaw and resistance fighters. Nay Pi Taw has repeatedly stated it has announced a unilateral ceasefire but resistance forces, including the armed ethnic groups, have failed to comply.

To be fair, in the past six months, some small progress has been made on the peace plan, especially on the proposed meetings with all stakeholders and the comprehensive work plans for humanitarian assistance which are items No. 3 and No. 4 of the 5PC framework respectively. Unfortunately, their implementation has not been comprehensively enough. That explains why the Asean Special Envoy would like to have additional meetings with the SAC authorities to work out tangible progress in Phnom Penh before his next trip.

In this case, Thailand, which has been adopting a low and discreet profile, could be more active and serve as a facilitator to ensure that all conflicting parties would be able to meet with the special envoy. And if need be, Bangkok with the blessing of the Asean chair, could jump start an initial political dialogue among stakeholders who are willing to do so.

Truth be told, it would be convenient for stakeholders to gain access quickly. Lest we forgot, hours after the February coup, Senior General Min Aung Hlaing wrote a six-page letter asking his Thai  counterpart for support and assistance.

Now, this is the time.

Early next month, the special envoy is scheduled to make a third visit to Nay Pyi Taw on a very important visit. He hopes that the long-awaited request for a meeting with Daw Aung San Suu Kyi will be fulfilled.

In addition, the communique also recognised Hun Sen’s early attempt to secure the release of Dr Sean Turnell, an Australian economist and an advisor to Ms Suu Kyi.

For the next critical 10 weeks, Myanmar’s future in Asean hangs in the balance. Never before in the 55-year-old history of Asean have the leaders laid out such conditions for a member to fulfil. The SAC must not underestimate the bloc’s collective determination.

After all, Myanmar is a litmus test for Asean’s credibility and solidarity when it comes to dealing with a pariah member of the family.

This opinion piece was written by ERIA's Senior Communications Advisor, Mr Kavi Chongkittavorn, and was published in Khmer Times. Click here to subscribe to the monthly newsletter.