ASEAN beyond 2015: Stability and trust needed 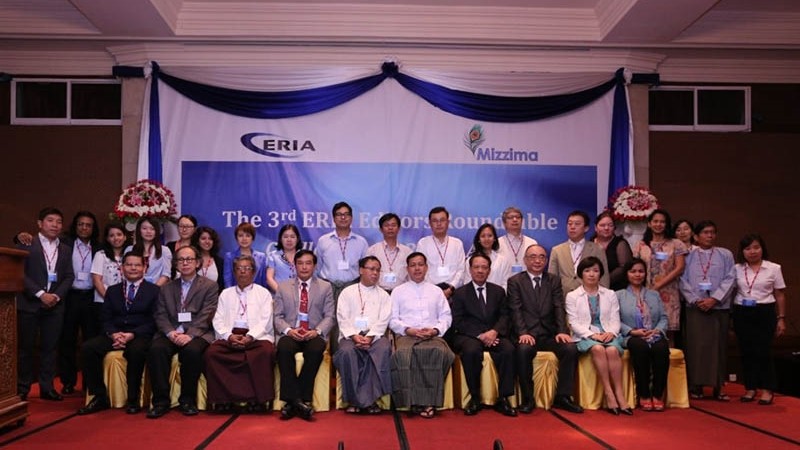 Yangon--25 November 2014: ASEAN beyond 2015 would need stability and trust to consolidate the grouping's economic integration and people-to-people connection according to H.E. U Ye Htut, Minister of Information, Myanmar.H.E. Ye Htut, who also serves as the Presidential spokesman, added that Myanmar has fulfilled its role as the chair by protecting the ASEAN interest and promote its unity.

On 13 November, Myanmar will be passed over its chair to Malaysia by end of this year, which will oversee the arrival of ASEAN Community on 31 December 2015.

In his key-note speech for the 3rd Editors Roundtable held here today, H.E.Ye Hut reiterated that from now on, Myanmar will play an active role inside ASEAN as well as in the international arena.

At the roundtable, Secretary General of ASEAN, H.E. Le Luong Minh, reiterated the importance of people-centered approach. He said that the integration of ASEAN Community has to be holistic encompassing all three pillars--political/security, economic, social and cultural area.

H.E. Minh answered questions posed by two-dozen editors and journalists from ASEAN and East Asia on issues related to progress of the ASEAN Community and plans of action of ASEAN beyond 2015. This was part of an annual dialogue with the media community in ASEAN and East Asia.

In the session on the future of ASEAN connectivity, there is a consensus that aviation would play a crucial role in bringing the peoples of ASEAN together and closer. "We connect ASEAN," said U Tin Maung Htun, Chairman of Myanmar Airways International reiterating the role of aviation in the people-to-people connectivity.He urged the ASEAN governments to lift visa so that all ASEANn passengers can travel freely. At the moment, Myanmar still places visa requirement from visitors from Thailand, Malaysia, Singapore and Cambodia.

Maung Htun provided the first-hand account of how his young airline company is expanding fast to serve the ASEAN people and beyond.

In their panel discussion, editors and journalists shared views and perspectives on the rise of ASEAN its global implications.