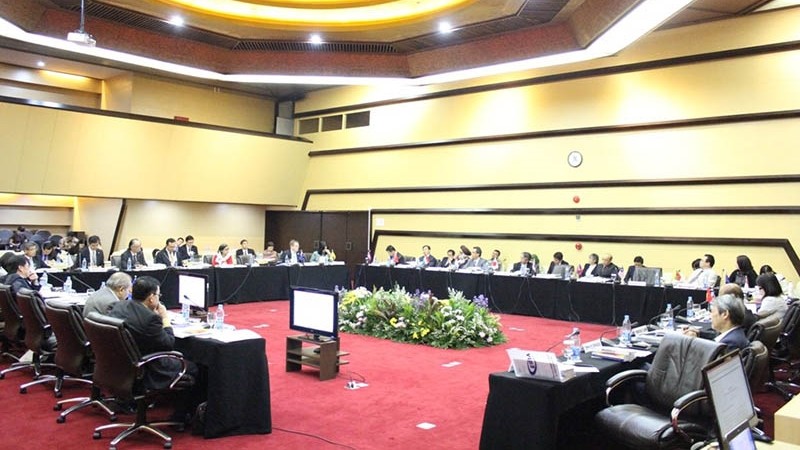 Jakarta, Indonesia - 26 June, 2014: Dato Paduka Lim Jock Hoi, chair of the Governing Board, opened the meeting praising the work of ERIA over past years. He said ERIA had achieved much progress with expansion of research inputs and activities to assist the integration of ASEAN and East Asia.

ERIA-Ambassador meeting was attended by 16 countries Ambassadors and representatives.

Prof. Hidetoshi Nishimura, Executive Director of ERIA, reported the accomplishments and future plans of ERIA at the meeting. Each year, ERIA conducts researches on various aspects of economic cooperation and integration in the broader East Asia. These inputs have been used in the various reports of ASEAN and other leading international organizations.

H.E. Min Lwin, Ambassador of Myanmar congratulated ERIA for its achievement and shared his views that ERIA's research and recommendations has been and will continue serving as useful references for ASEAN Community building processes by and beyond 2015. H.E. Min Lwin further acknowledged ERIA's roles in promoting Public Private Partnership (PPP) in the region including providing support to related annual symposiums last year and this year's event which will be held in Myanmar in September 2014 with a theme of Catalizing PPP to Finance ASEAN connectivity. He wished for continuous support of ERIA to ASEAN and East Asia through its research and policy recommendations.

In relation with ERIA Working Program for 2014, they were pleased to know that ERIA is planning to conduct a project on the implementation of Master Plan of ASEAN Connectivity (MPAC) and a study on PPP's status and role in ASEAN. They are assured that ERIA's recommendation of the topics would be a useful reference for ASEAN Member States.

In the afternoon, ERIA - Russia Dialogue Partner Meeting with H.E. Alexander A. Shilin, Deputy Chief of Mission of the Embassy of the Russian Federation, he said that Russia has identified the Southeast Asian region as a priority for investment and expanding connectivity in Asia. "There are also vast potential in the ASEAN-Russia relations, especially in food security and energy, and we want to make sure there are real cooperation." reiterated Shilin during his opening remarks during a consultative held today at the ASEAN Secretariat. "Russia also serves a transit point between Asia and Europe," he added. The consultative meeting with dialogue partners was organized by ERIA to exchange views and strength cooperation with key ASEAN stakeholders.

ERIA also held an ERIA - United States of America Dialogue Partner meeting. H.E. Larry Miles Dinger, Senior Advisor of the United States Mission to ASEAN acknowledged ERIA's important roles in supporting ASEAN's 2015 Economic Community goals including its achievement in producing AEC scorecard, analyzing ASEAN's flow of skilled labor and studying food security for the region. He reiterated that ASEAN remains central to the US as the global center for economic growth. This has been reflected in the creation of various mechanisms to bridge partnerships between the two sides including the establishment of US Mission to ASEAN and ASEAN-US Summit as well as US participation in the East Asia Summit (EAS). The overall engagement between ASEAN and US has been envisaged in the US - ASEAN Trade and Investment Framework Agreement in which several proposals have been put forward by the US specifically on the principles of investment, information and communication technology (ICT), and transparency as well as a follow-up to the World Trade Organization (WTO) - Bali agreement on trade facilitation.