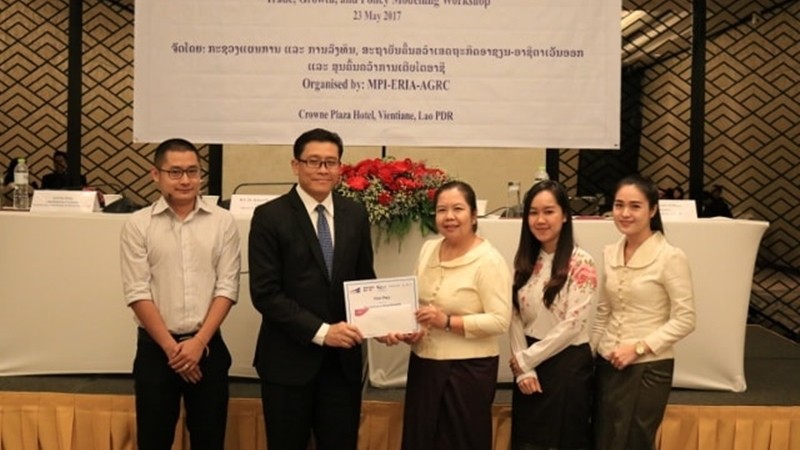 On 23 May, the final event of the Trade, Growth and Policy Modelling Workshop Series took place at the Crown Plaza Hotel, Vientiane, Lao PDR. At this event, prizes were awarded to the three best studies undertaken by multi-ministry teams participating in the series.

Presented by the Vice Minister, Minister of Planning and Investment, H.E. Dr Kikeo Chantaboury, first prize went to a study by a team of five, ‘The Impact of Infrastructure Development and Poverty Reduction in Lao PDR’. Their study examines the linkage between transport infrastructure and poverty and the impact of transport infrastructure in enhancing trade, investment and human capital in Lao PDR. Team members for this study were Mr Soulaxay Bounthideth, Ms Maniseng Douangnoulack, Ms Sumiva Viengkeo, Ms Phonepavina Vansana and Ms Visouda Saignavong.

Second prize went to a four member team for their study on ‘Tourism Development and Services Global Production Value-chain in Lao PDR’. These two papers, as well as two others, were presented in-front of the Vice Minister and the Australian Ambassador to Lao PDR, H.E. Mr John Williams. 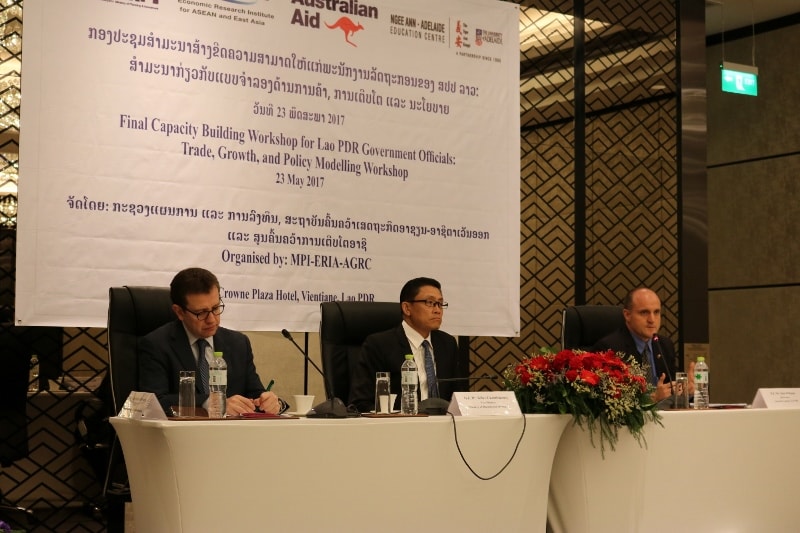 Held under ERIA’s Capacity Building Programme, the workshop series began in November 2016, with a second in January 2017, facilitated by Prof Shandre Thangavelu and Dr Southea Oum of the Asia Growth Research Centre, Ngee Ann, University of Adelaide. At the workshops the participants, from eight ministries and state institutions including the Ministry of Planning and Investment, Ministry of Finance, Ministry of Industry and Commerce, the National Institute of Economic Research and the Bank of Lao PDR. A Memorandum of Understanding was signed between H.E. Dr Souphanh Keomixay, Minister of Planning and Investment, and Hidetoshi Nishimura, President of ERIA, in 2016, to support this workshop series.

In his opening comments, H.E. Dr Kikeo Chantaboury noted that this kind of capacity building is very important for Lao official to improve their analytical skills and undertake effective economic and social modelling and economic strategies as well as to develop strong empirical and evidence based policy capabilities. In addition, he also expressed his sincere thanks to ERIA, the Australian Government and Asia Growth Centre, Ngee Ann, University of Adelaide for their support for the Lao PDR.

H.E. Mr John Williams in his opening comments noted that capacity building programmes such as this are more vital than ever in the current challenging policy environment as they can help governments navigate their way through the challenges with evidence based data and analysis.

At the event, two other papers were presented. The first was by Prof. Phouphet Kyophilavong of the National University of Laos. The title of his paper was ‘Economic Challenges for Laos’. The second paper, by Dr Southea Oum, was entitled, ‘SME Policy Developments in ASEAN: Gaps and Challenges’.

The workshop series was made possible through Australian government funding for the ERIA Capacity Building Programme.