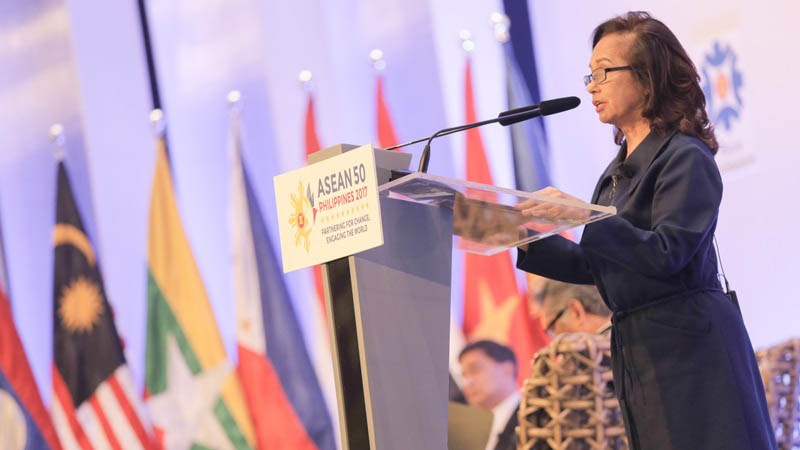 Former Philippine President Gloria Macapagal-Arroyo highlighted the importance of state authorities reaching out directly to the people through social media in an age where even the poorest members of society have internet access.
'I think as far as civil society is concerned, I think we've not been remiss. Maybe with media we have to do more,' said Dr Macapagal-Arroyo, responding to a query fielded during the High Level Forum on ASEAN @50.

The forum was organized by the Department of Foreign Affairs (DFA), the Economic Research Institute for ASEAN and East Asia (ERIA), and the Foreign Service Institute (FSI) of the Philippine Government with the support of Japan-ASEAN Integration Fund (JAIF) and ASEAN Foundation (AF) as part of commemorative activities for the 50th founding anniversary of the Association of Southeast Asian Nations (ASEAN).

Dr Macapagal-Arroyo was among the eminent leaders invited to speak during the forum where she discussed how during her presidency she led the Philippines to 38 quarters of uninterrupted growth and how this economic development contributed to the regional economic boom.

Acting as moderator in the afternoon session where the former Philippine President spoke, former ASEAN Secretary General Surin Pitsuwan mused why there appears to be lingering suspicion about the significance and continued relevance of ASEAN.

'You were talking about ASEAN being very leader oriented, not enough dealing with the mass base. So if we were to put ASEAN's attention for communicating somewhere more than another, I would say ASEAN should engage the media more,' Dr Macapagal-Arroyo replied. 'After all now, media is not just newspapers and television and radio. Media is social media.' She explained that social media is a direct link to the people of ASEAN considering that even the poor 'would be characterized as having social media.'

Dr Macapagal-Arroyo, president of the Philippines from 2001-2010, served as leader of one of ASEAN's founding members for one-fifth of the grouping's existence. She served as ASEAN Chairman in 2007, steering the organization toward keeping the doors of global trade open in the aftermath of the collapse of the Doha round of World Trade Organization talks.

It was also under her leadership that ASEAN adopted a convention protecting the rights of migrant works, a complicated undertaking considering that ASEAN has both labor exporting and receiving members.

ASEAN was also able to forge and convention against terrorism and violent extremism, which has now become the basis for trilateral sea patrols between the Philippines, Malaysia, and Indonesia to prevent armed militants from crossing their porous common borders.

In her speech, Dr Macapagal-Arroyo listed the projects ASEAN has undertaken that has had a direct influence on regional peace and stability that, consequently, allowed ASEAN governments to concentrate on domestic concerns and for their people on personal development.

Dr Macapagal-Arroyo acknowledged that there are simmering conflicts that ASEAN has not been able to fully address - such as the conflicting claims over the South China Sea and the stalled denuclearization of the Korean peninsula.

ASEAN continues to closely work with dialogue partners to manage these issues keep them manageable. 'For half a century, ASEAN has kept the peace, expanded our economies and drawn closer through trade, diplomacy, and cultural exchange,' she addressed the audience, noting this feat is additionally impressive considering how diverse ASEAN economies and cultures are. 'It's impressive that ASEAN has resisted the temptation to drift apart.'

Nevertheless, she cautioned against complacency. 'We must ask what will ASEAN look like 50 years from today...The future will belong to those nations who seek common ground to resolve common problems,' she said. 'We must all press for ever closer cooperation in ASEAN if we are to collectively benefit from the good and collectively tackle the challenges together.'